AI speakers are good for music, lousy at chitchat

AI speakers are good for music, lousy at chitchat 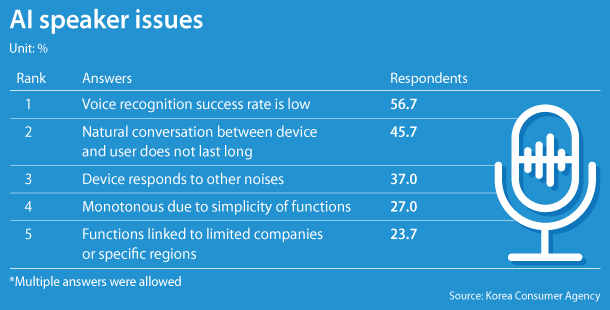 Voice recognition is both the most anticipated and most disappointing function in AI speakers, according to research from the Korea Consumer Agency.

Around 57 percent of 300 respondents answered that their AI speakers’ voice recognition did not operate smoothly in an everyday setting. An inconvenience reported to the agency was that the device couldn’t interpret what the user said unless they used slow and clipped speech.

At the same time, 46.3 percent answered that they had been looking forward to a device that understands the human language more easily, which topped the list of anticipated functions prior to purchase. The second on the list was daily conversations or small talk with the AI speaker, but this also ranked second in the most disappointing features, selected by 45.7 percent of respondents.

The third was that it reacted to other noises, selected by 37 percent of respondents. One case reported to the consumer agency was an AI speaker having turned on music when the user was not home, prompting a neighbor to file complaints.

On the contrary, users turned out to be most satisfied with the weather and traffic information offered by the AI speaker, which earned the most points when respondents were asked to score ten functions from a scale of zero to four. This was also the second most used feature.

The most frequently used function and the second most preferred was the ability to play music. Seven out of ten respondents said they frequently use this function.

Searching information on the internet, managing schedules and listening to the radio and podcasts were other answers that ranked within the top five on both lists of most satisfying and most used functions.

The general satisfaction with AI speakers turned out to be quite high, as all ten functions suggested in the survey received scores between 2.78 and 3.15 out of 4 points.

“Voice-recognizing speakers are marketed as cutting-edge, AI-based devices which elevate the consumers’ expectations of the product before the actual purchase,” said the Korea Consumer Agency.

It advised manufacturers to refrain from using catchphrases that fuel high expectations - such as “a good conversation companion” or a “counselor for romantic relationships.”