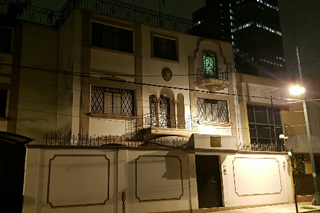 A view of the embassy of North Korea in Mexico City, Mexico, on Thursday. [YONHAP]

The Mexican government on Thursday ordered North Korean ambassador to Mexico, Kim Hyong-gil, to leave the country within 72 hours, declaring him persona non grata in repudiation of the North’s sixth nuclear test.

In a statement issued by its foreign affairs ministry, Mexico condemned the North’s sixth and most powerful nuclear test, conducted on Sunday, which the North claimed was a hydrogen bomb, and noted its decision to expel the North Korean diplomat was in accordance with UN sanctions aimed at stopping individuals and entities from helping the North’s missile and nuclear programs.

“North Korea’s nuclear activity poses a grave risk to international peace and security and is a growing threat to the nations of the region, including key allies of Mexico such as Japan and South Korea,” said the country.

In addition to the expulsion, Mexican President Pena Nieto issued an executive order, “instructing all government agencies to comply fully with the UN Security Council resolutions on North Korea.”

Urging the North to meet the international community’s demands to dismantle its nuclear arsenal, Mexico stressed its full support for the UN’s efforts to achieve the denuclearization of the Korean Peninsula. Mexico also called for a peaceful resolution of the current crisis.

Mexico’s move comes as the United States is pushing for the toughest sanctions against the regime to date, for its Sept. 3 nuclear test. The U.S.-drafted resolution, which would ban the supply, sale or transfer to North Korea of crude oil, condensate, refined petroleum products and natural gas liquids and freeze financial assets of North Korean leader Kim Jong-un, among other restrictions, is expected to be put to a vote by a 15-member UN Security Council on Monday in New York.

In line with growing calls to put more pressure on the North, the European Union is also leaning toward imposing its own additional sanctions, including the expulsion of North Koreans, whose labor constitutes a cash flow into the cash-hungry North, which then uses it for missile and nuclear programs.