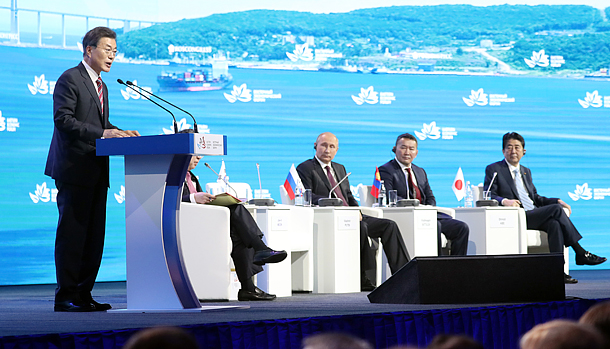 The Moon Jae-in administration is reviewing a plan to build an industrial complex at the Russia-North Korea border as part of a trilateral economic cooperation project, the JoongAng Ilbo reported Friday, quoting multiple government sources.

The plan will be in clear defiance of the international community’s efforts to toughen economic sanctions against Pyongyang to pressure it to end its nuclear and missile programs.

“The key of the plan is building an industrial complex at the Rajin-Khasan region at the North-Russia border,” a Seoul official told the JoongAng Ilbo, on the condition of anonymity. “Before President Moon’s visit to Russia, Blue House aides and experts gathered and had a serious discussion on the plan.”

He added, “In order to back the Rajin-Khasan industrial complex, the administration plans to increase the inter-Korean cooperation fund, managed by the Export?Import Bank of Korea, by $2 billion.”

Moon attended the Eastern Economic Forum, hosted earlier this week by Russia in Vladivostok, where he had a summit with Russian President Vladimir Putin on Wednesday and discussed his plans for trilateral economic projects among the two Koreas and Russia.

A joint economic committee between Seoul and Moscow also convened before the summit and announced an agreement on the “Eastern Finance Initiative.” According to the committee, the initiative will raise $2 billion over the next three years to support Korean companies that participate in infrastructure projects in the Far Eastern region of Russia.

It remains to be seen if the initiative is linked to Moon’s plan to increase the inter-Korean cooperation fund.

In his keynote speech at the forum on Thursday, Moon again stressed his vision to push for trilateral economic cooperation.

“Even if the ambitions for the trilateral cooperation of the two Koreas and Russia cannot be pushed forward right now,” he said, “South Korea and Russia must cooperate to start bilateral projects that can be started immediately. If the North joins from the start, of course, that will be far more desirable.”

The source told the JoongAng Ilbo that the Blue House is determined to include North Korea.

“The position was confirmed at a meeting hosted by Kim Hyun-chul, the president’s economic adviser, [before Moon’s trip to Vladivostok],” he said.

A senior Blue House official said the Rajin-Khasan development project is one of Moon’s major campaign pledges. “Because the inter-Korean talks are severed now, Moon said he wants to strengthen cooperation with Russia for the time being and persuade the North later.”

The Economic Joint Committee of Seoul and Moscow also agreed on Wednesday to open a consultation channel for the trilateral cooperation projects to link railways, gas pipelines and electricity grids of the Korean Peninsula and Russia’s Far East.

The agreement indicates the Moon administration’s intention to restart the Rajin-Khasan project, which was shelved during the presidency of his predecessor, Park Geun-hye.

The logistics project aims to refurbish the port of Rajin in North Korea and a railroad connecting it to the Russian town of Khasan. The development project of the North-Russian border region was a grand plan of former President Roh Moo-hyun, Moon’s political mentor, but was suspended after the North conducted its first nuclear test in 2006.

During the Park presidency, the concept was revived with her “Eurasia initiative,” and some South Korean companies made investments, but Seoul pulled the plug of all inter-Korean projects, including the Kaesong Industrial Complex and the Rajin-Khasan project, after the North conducted its fourth nuclear test in January of last year.

The Moon administration already made clear its intention to restore the project. Rep. Song Young-gil, appointed by Moon as head of the Northern Economic Cooperation Committee, said in a forum last month that the Park government unilaterally shut down the Rajin-Khasan project, which was excluded in the UN resolutions with Russia’s efforts.

“Before trying to restart the Kaesong Industrial Project,” Song said, “this must be resumed first.”

Experts, however, are skeptical, saying offering an economic cooperation project to Pyongyang, amid the ongoing efforts of the UN Security Council to impose stronger sanctions, will face global criticism.

They also said UN sanctions bar North Korea from exporting labor and Washington’s secondary boycotts on companies linked to the North will be obstacles, even if Seoul and Moscow push the plan forward.

“After creating an industrial complex in Vladivostok for small and medium-size companies, they can propose to hire North Korean labor when it proceeds smoothly,” said Cho Bong-hyun, deputy head of the IBK Institute. “There is enough time, because the consultation will take a long time, and Russia will agree with the idea.”

The plan to increase the inter-Korean cooperation fund by $2 billion will also invite criticism. “The government has many places to spend money such as welfare and defense programs,” said a former researcher of a state-run institute that participated in the development projects of North-China and North-Russia border areas.

“Coming up with such a large amount of money will be tough. Furthermore, it will face strong scrutiny at the National Assembly.”

He also showed skepticism regarding the prospect of the Rajin-Khasan project, saying, “Even Chinese companies are leaving Rajin because they think it is hard to beat the UN sanctions.”

A Blue House official, however, insisted on the importance of keeping the project. “We already increased the budget for the inter-Korean cooperation fund by 1 trillion won ($885.4 million),” he said.

“We may not be able to use it next year because the North does not respond to our offers. But we need to secure enough budget to push forward inter-Korean and trilateral projects when dialogues begin.”