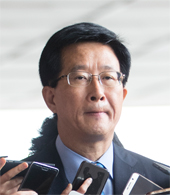 The prosecution condemned a local court on Friday for rejecting its request to detain former intelligence officials suspected of running domestic political operations during the Lee Myung-bak presidency.

The Seoul Central District Prosecutors’ Office on Tuesday asked the Seoul Central District Court to issue warrants to detain a former director and a secretary general of the Yangji Association, a group created by retired agents of the National Intelligence Service (NIS). The prosecutors said they want to detain the suspects due to flight risks and possible evidence destruction.

The court, however, rejected the request on Friday, saying the prosecution’s charges are convincing, but that it sees no risks of flight or evidence destruction.

The NIS announced in July that it has decided to conduct internal investigations into 13 cases of its own domestic political interference, as part of a campaign to clean up its act. All 13 cases occurred during the tenures of the last two conservative administrations of Lee and Park Geun-hye. President Moon Jae-in was elected in May after Park was impeached and removed from office for abuse of power.

The top priority of the internal fact-finding mission was the NIS’s cyber operation to smear Moon when he unsuccessfully ran for president in 2012. Moon was narrowly defeated by his conservative rival, Park.

The internal probe was concluded last month and the NIS said it discovered that the cyber smear campaign against Moon in 2012 was just a part of a larger domestic political operation.

A group of civilians were hired from May 2009 to December 2012 to post online comments slandering liberal politicians and presidential contenders and the so-called “public opinion brigades” were funded through state coffers, the NIS said. It handed over the case to the prosecution for a criminal investigation and subsequent indictment.

The NIS asked the prosecution to investigate 48 leaders of the public opinion brigades. The prosecution formed an investigation team on Aug. 23 and raided dozens of homes and offices the next day. Among the offices raided was the office of the Yangji Association.

After the court rejected the warrant request, the Supreme Public Prosecutors Office issued a statement under the title of the second deputy prosecutor-general.

“We cannot accept the court’s decision. The Yangji Association received hundreds of million won of tax money from the NIS for explicit operations to influence the presidential election and domestic politics,” the statement said. “After the investigation began, the association destroyed evidence, claiming that it was just the two suspects’ individual activities.”

The Seoul Central District Prosecutors’ Office also issued another statement on Friday to criticize the court’s decision. “We have long respected decisions of the judiciary,” the statement said. “But we cannot understand the reasoning of the latest rejection of the warrants. They are largely different from the precedents.”

Prosecution sources said not only the two suspects but other members of the Yangji Association were involved in the domestic political operations and subsequent cover-ups. They argued that the association carried out an organized cyber operation with the NIS’s support.

While the attempts to detain senior members of the Yangji Association were deterred, the prosecution continued its probe into the state-sponsored propaganda scandal. Min Byung-ju, former head of the psychological operations bureau of the NIS, was summoned by the Seoul Central District Prosecutors’ Office on Friday for questioning.

Min, so far, is the highest member of the NIS to be questioned over the agency’s operation of public opinion brigades.

Min was reportedly in charge of operating the public opinion brigades during the leadership of Won Sei-hoon. Won headed the NIS from 2009 to 2013 during the Lee presidency.

Min was questioned as a suspect on Friday. The prosecution said it wants to find out who was pulling the strings of the domestic political operation. “The key of the questioning is finding out if Min had contacted and communicated with the Lee Blue House when he operated the public opinion brigades,” a prosecution source told the JoongAng Ilbo.

Min was already investigated in April 2013 on charges of running political operations to help Park win the 2012 presidential election. He was later prosecuted along with Won, former director of the NIS, and Lee Jong-myung, former third deputy director of the NIS. On Aug. 30, they were all found guilty.

Won was sentenced to four years in prison and Lee and Min were each sentenced to suspended prison terms of two years and six months.