A record-breaking weekend for Chang Yi-keun

A record-breaking weekend for Chang Yi-keun 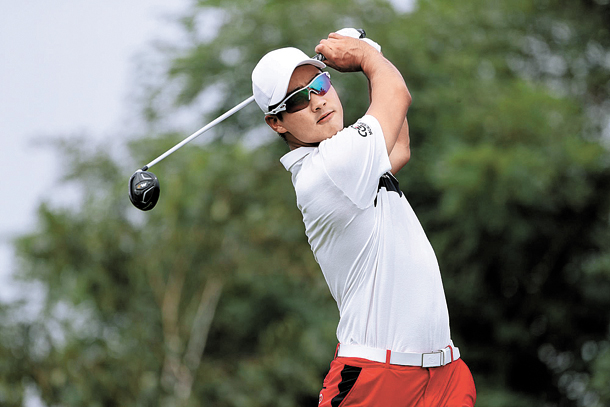 With a record-breaking victory at the T-up Gswing Mega Open at Dream Park Country Club, Chang Yi-keun became the KPGA Tour’s first multiple winner of the season on Sunday.

After playing 54 holes, Chang set a KPGA Tour record with his score of 23 under-par. On the final day, Chang played a bogey-free round of 67, five under-par, to finish two shots ahead of Hyun Jeong-hyup and Im Sung-jae. Chang got off to a great start in the final round with a birdie on third. Then, on the par-4 fifth hole, Chang hit his second shot over the green, but successfully chipped it in from 17 meters (18.5 yards) for another birdie, shooting two under-par in the front nine. 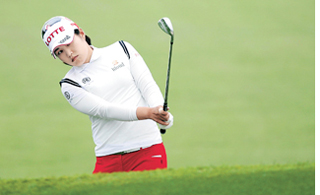 Jang Su-yeon watches her shot during the final round of the Isu Group 39th KLPGA Championship. [YONHAP]

Then with back-to-back birdies on 11th and 12th, he once again extended his lead and on the par-3 14th, considered the most difficult hole, Chang made a nine-meter birdie putt to secure his victory.

“It feels great,” Chang said after the round. “I tried not to think about the record. I just tried to play my hardest at every hole. I can’t wait for the next two tournaments.”

Chang not only came out with a victory, but he also set two more records - KPGA Tour’s 72-hole record and becoming the first rookie on the KPGA Tour since Kim Kyung-tae in 2007 to be a multiple winner in a season. Chang’s score of 28 under-par for the weekend, exceeds Lee Hyung-joon’s record of 26 under-par last season at the Tour Championship.

With a victory, Chang took home a 100 million won ($88,340) prize and is now leading in the prize money and rookie of the year races.

Im, who was aiming for a no-bogey victory for the first time in the 27 years of the KPGA Tour, had to be satisfied with a runner-up finish by missing a one-meter putt on the first hole of the final round. Lee Seung-taek set another record in the KPGA Tour, the lowest 18 hole score of 12 under-par, 60. With that, Lee moved up 19 spots on the final day, finishing fourth at 25 under-par.

On Thursday, the 32nd Shinhan Donghae Open will begin at Bears Best Golf Club at Incheon.

This weekend on the KLPGA Tour, Jang Su-yeon overcame six shots in the final round the capture her third major tournament win of the season at the Isu Group 39th KLPGA Championship at Gapyeong Benest Golf Club in Gyeonggi on Sunday.

Jang Su-yeon, who started the final tied for third at 11 under-par, but played a bogey-free round of eight under par - with six birdies and an eagle - to finish three shots ahead of Jang Ha-na.

With two additional birdies on 15th and 17th, Jang Su-yeon extended her lead to three shots for the victory.

In the beginning of the season, Jang Su-yeon, the three-time KLPGA tournament champion, was in the spotlight on the LPGA Tour at the Lotte Championship in Hawaii. During the tournament, Jang held a three-shot lead heading into the final round, but with an even-par round, she had to let go of her grasp on of her first LPGA Tour victory. However, she struggled on the KLPGA Tour, only recording two top-ten finishes.

Jang Ha-na once again came up short of winning her first KLPGA Tour title by shooting two over-par in the final round. Despite Jang’s four victories on the LPGA Tour, she has not won a tournament on the KLPGA Tour since Sept. 2015.