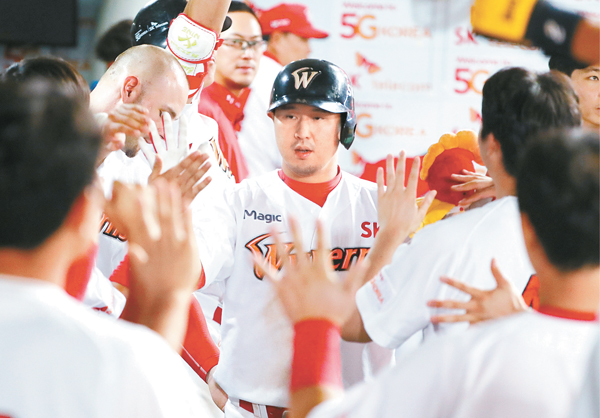 Choi Jeong, third baseman for the SK Wyverns, celebrates with teammates after hitting a home run during the Wyverns’ game against the Samsung Lions at Munhak Baseball Stadium on Sept. 1. [KIM MIN-KYOO]

During the SK Wyverns’ game against the Lotte Giants on Sept. 5, Choi Jeong became the first player to hit 40 home runs this season. Though Choi’s playing time has been reduced due to a calf injury recently, it didn’t prevent Choi from hitting home runs, hitting his 39th home run the day he returned to the Wyverns’ lineup during a game against the Samsung Lions on Sept. 1.

With Choi’s achievement, he became the fourth batter, after Lee Seung-yuop of the Samsung Lions, Shim Jung-soo of the Hyundai Unicorns and Park Byung-ho, formerly of the Nexen Heroes, in Korea Baseball Organization (KBO) history to have hit 40 home runs in back to back seasons.

Having already hit 43 home runs and 105 RBIs this season, Choi is well on pace to exceed 45 home runs. Looking at Choi’s KBO career, he has slowly changed his style of play, setting records in multiple categories. Since the 2008 season, Choi has managed to record two digit stolen bases for six consecutive seasons.

But when Choi injured his back, neck and hamstring in 2014, he had to give up stealing bases and shift his focus to batting.

“Since I don’t run as much, when I attempt to steal a base, I feel myself getting timid,” Choi said at the end of last season. “I was worried that I would negatively impact the team’s performance during the game by failing to steal a base. Next year, I’m not going to steal any bases.”

This season, Choi has only one stolen base in the 120 games he has played, but that is because the third baseman is solely focused on hitting home runs. Last season, for the first time since his KBO debut, Choi hit 40 home runs to win the KBO’s home run title along with Eric Thames, who now plays for the Milwaukee Brewers in the MLB.

Additionally, Choi has set a new record in the KBO’s seasonal slugging percentage, at 0.580, beating his 2016 percentage.

With his astounding success in 2016, many were wary if Choi would be able to repeat the success ever again.

But he proved them wrong, as Choi is once again reaching career highs this season. Choi’s RC/27, a number of runs a player makes in 27 outs, used to be 9.16, but is now at 10.92. Of the 43 KBO batters that met the KBO’s minimum at-bat requirement, only four batters - Choi Hyoung-woo of the Kia Tigers, Wilin Rosario of the Hanwha Eagles, Kim Jae-hwan of the Doosan Bears and Choi - have a RC/27 above 10.

In addition, Choi is ranked first in Isolate Power percentage (ISO), at 0.392. The ISO has direct correlation with a batters’ slugging average, as a higher ISO percentage is tied to a higher slugging percentage.

“I’ve tried to put my impact point more in the front of my swing compared to the past and focused on having a longer follow through,” Choi said. “I think my mindset of trying to hit a fly ball rather than a ground ball is allowing me to make bigger hits.”