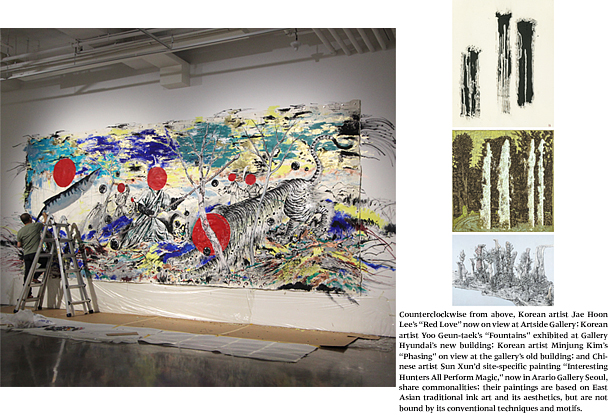 Four Korean and Chinese artists who recently began solo exhibitions around Gyeongbok Palace in central Seoul coincidentally share a commonality; their paintings are all based on East Asian traditional ink art and its aesthetics but are not bound by conventional techniques and motifs.

Among them, Sun Xun, an up-and-coming Chinese artist, presents 20 spectacular paintings of dashed-off brushstrokes in ink and mixed media and an animated film based on these ink drawings in his solo show titled “Tears of Chiwen.”

The exhibition, running until Nov. 5 at Arario Gallery Seoul, east of Gyeongbok Palace, is about the Chinese artist’s impressions of Korea’s history and culture during the period of modernization, Sun said.

“Chiwen’s tears result from the regret of lost traditions and the joy of new changes at the same time,” he told the reporters at the gallery last week.

“Chiwen” refers to small sculptures of a dragon or other monsters perched for decoration on the roofs of old Korean and Chinese buildings. Many of the artist’s paintings and animations on display feature the monsters in hybrid forms that originate both from the conventional iconographies and from his imagination influenced by Western culture.

Belonging to “Balinghou” or the post-’80s generation of China, Sun said he grew up virtually separated from tradition. He added, “Art is not about making something beautiful but is about thinking new and dangerous things.”

At Gallery Hyundai near Arario, two solo shows from Korean artists are going on in both its old and new buildings.

Yoo Geun-taek presents 37 of his latest paintings in an exhibition titled “Promenade,” which runs until Sept. 17. The 52-year-old has used mediums typically used in traditional East Asian paintings such as hanji paper, the black ink known as meok and hobun, known as Chinese white, for his paintings. But the results look quite different from traditional East Asian art, as the artist creates unique texture in his paintings by scratching hanji piled thick.

The subjects of Yoo’s paintings are also different from those of old Korean and Chinese paintings. His works depict fountains, rooms with mosquito nets, bathtubs with showers and landscapes of low mountains near his studio in northern Seoul.

“East Asian paintings have never depicted a fountain, as it is against the law of nature in which water flows downward,” Yoo said at the gallery last month. “But I’m greatly interested in fountains, as they have the power of suddenly, dramatically changing an ordinary environment.”

The other artist Minjung Kim, 55, who is active in France and the United States, presents about 30 of her latest paintings. The title of her solo show “Paper, Ink and Fire: After the Process,” which runs until Oct. 8, summarizes her works’ mediums.

In her “Phasing” series, the artist dashes calligraphic strokes of meok on a first sheet of paper and then, on a second sheet, she traces out the outlines of the meok strokes and cuts out the parts by burning them with incense sticks. Finally, she overlaps the sheets to complete a work.

On the other hand, at Artside Gallery, located to the west of Gyeongbok Palace, Jae Hoon Lee presents 12 new paintings and one installation work in a solo show titled “For a Fight on the Green Field,” which runs until Sept. 24.

In the unique paintings, which combine East Asian traditional ink painting and Western fresco, the 39-year-old artist tells “the story of hidden links between modernization under the Japanese colonial rule and the contemporary period,” the artist said last month.