Sculptor’s family speaks out against forgeries

Sculptor’s family speaks out against forgeries 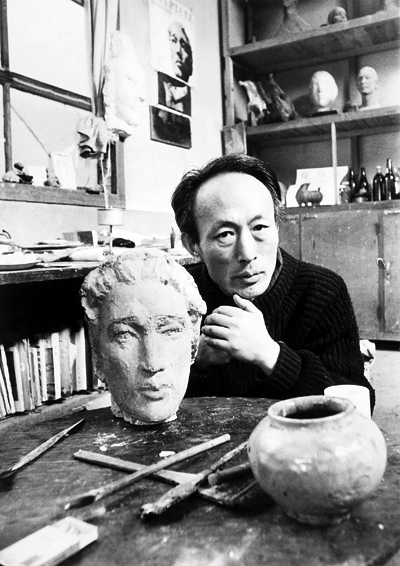 Is a sculpture made posthumously considered authentic? That is debatable.

“The Gates of Hell” by Auguste Rodin was cast in bronze in 1926, nine years after he died. Not only his pieces but many others throughout history have been reproduced based on the mold that the artist left behind. These pieces, produced under strict quality control, are often treated as well as the originals.

The case of Kwon Jin Kyu, a pioneer of modern Korean sculpture (1922-73) is a bit more complicated. The tragic sculptor killed himself at the age of 51. Before he committed suicide, he eliminated most of the molds of his works.

But, additional editions of his works have been made by casting directly from sculptures that were made while he was still alive. This act of producing posthumous castings have been at the root of controversy in the Korean art community.

Top: “Scene with a Horse and a Figure” (1956-57) Below: A terracotta piece titled “Woman with a Scarf” made circa 1969. [Courtesy of Kwon Jin Kyu Commemoration Foundation & PKM Gallery]

Kwon Jin Kyu Commemoration Foundation held a press conference on Aug. 23 at PKM Gallery in central Seoul and stated that they distinguish posthumous editions from originals, while expressing the view that the trade of posthumous editions is undesirable. It also shared the plan for publishing a catalogue raisonne of Kwon’s pieces. A catalogue raisonne is an annotated listing of all the known works of an artist.

“Posthumous casting depends on what the artist wanted,” said Park Hyoung-gook, a professor of History of Art and Design at Musashino Art University of Japan.

He added, “In contrast to what Rodin did, not only did Kwon remove the molds and [notes about] his techniques, but also had published criticism against posthumous casting before he died.”

The professor added that if an edition is made by casting from a finished work, not from a mold, regardless of how well it is produced, the piece becomes slimmer than the original piece by its horizontal contraction. “Finger prints of Kwon will be removed as well,” said Park.

In commemorating the 80th year since the foundation of Musashino Art University, the university selected Kwon Jin Kyu among numerous graduates and opened a retrospective exhibition of his work at the National Museum of Modern Art, Tokyo and other locations, offering an opportunity to highlight him once again. Helping the university secure works for the show, Park also confirmed that there are several posthumous castings in well-known Korean museums as well.

However, not all the posthumous castings are forgeries. According to Huh Kyung Hoe, a niece of Kwon, who is now the director of the foundation, the bereaved requested Japanese experts to produce a bronze edition of a terracotta piece.

Some pieces kept in the National Museum of Modern and Contemporary Art of Korea (MMCA) seem to have been made out of the artist’s family's request as well. According to the MMCA, “Out of 27 works, three bronze pieces were donated from the artist’s family after Kwon passed away and the museum is aware that the pieces are posthumous castings made by bronze.”

It is uncommon for the family of the artist to officially state their opinion about posthumous reproductions. What’s more is that there hasn’t been any public outcry regarding Kwon’s pieces. Thus, the catalogue raisonne of Kwon Jin Kyu which will be produced by the foundation, the Musashino Art University and MMCA is being looked at with curiosity. It will be divided into books, separated by topic such as sculpture, oil painting, data and reference and the history of research.

The books will be produced and released one at a time until 2022, the year that commemorates Kwon’s 100th birthday. According to Park, there will be detailed information on both the originals and posthumous castings in the catalogue.

Meanwhile, the PKM Gallery is holding the exhibition, “Kwon Jin Kyu The Essence” until Oct. 14, where the museum offers 23 works of various sculptures, drawings and “A Mold of Aeja,” which is the only plaster mold of the artist that remains.