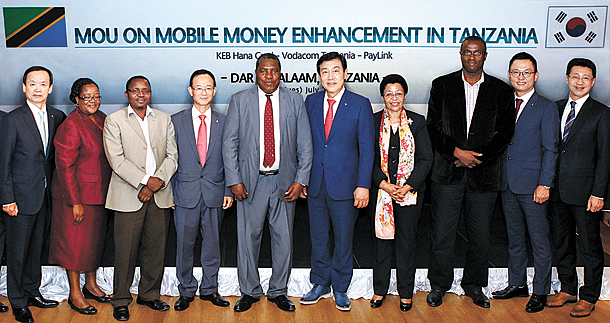 Chairman Kim Jung-tai of Hana Financial Group, sixth from left, and Chari Mwanaidi Majaar of Vodacom Tanzania, seventh from left, celebrate the signing of a memorandum of understanding aimed at cooperating on the development of digital payment systems on July 25 in Tanzania. [HANA FINANCIAL GROUP]

For many of Korea’s financial institutions, populous Southeast Asian countries such as Indonesia and Vietnam used to be the primary destinations for overseas expansion, due to their proximity and the already strong presence of Koreans and Korean companies.

Banks and card companies, however, increasingly move farther afield to continents such as Africa and Europe as they look to new growth engines amid low interest rates at home and stiff competition in Southeast Asia as well as the local market.

This is the first time that a Korean company is making inroads into African card services.

“We decided to enter the region since we aim for the initial significant occupant of the market segment,” said a spokesperson of Hana Financial Group. “African countries have less-developed technology and infrastructure to back advanced mobile financial platforms. And there we see the business opportunity.”

Chairman Kim Jung-tai of the financial group flew to Tanzania at the end of July to sign a memorandum of understanding with the telecom company.

“The partnership is meaningful because it will allow the group to generate a new growth engine in the non-banking sector and promote our payment technology 1Q Pay,” the chairman said at the ceremony. “[Hana Financial Group] is also in talks with a major telecom company in Kenya where the use of mobile money is widespread.”

Multiple media reports said that the Kenyan company is Safaricom, another telecom company that provides the M-Pesa system.

“We plan to visit Kenya next week to continue the ongoing talks of a business partnership,” a source at KEB Hana Card told Korea Joongang Daily, declining to specify which company that Hana is in discussion with.

Back in 2013, the group set up a Korea Desk in the region to target Korean corporations in Africa. The entry was made possible with the cooperation of Barclays Bank, though it withdrew due to flagging profits. Domestic rivals, including Woori Bank and Shinhan Bank, are entering Poland by establishing offices there.

Woori Bank opened a representative office in Poland in February to make the office a central place to cover the European business. There the bank will focus on corporate finance as there are branches of conglomerates.

Its location indicates the bank’s focus because the city, Katowice, is home to assembly lines of Samsung Electronics, Hyundai Motor and Kia Motors. The Industrial Bank of Korea also plans to operate in Poland by the end of this year.