Imported beers on the shelves of a retailer in Seoul. The popularity of imported and craft beers in Korea continues to soar. [YONHAP]

Kang Hee-su, a 27-year-old office worker, often goes out for a drink with her colleagues after work. Kang and her coworkers always used to drink lager or soju to relax after a long day, but recently they’ve started to visit a new bar with craft beer on tap and a range of international ales chilling in the fridge.

Kang isn’t the only one to have fallen in love with craft beer - technically beer that has been produced by an independent brewery using traditional techniques, although in Korea the term often encompasses all ale, both made at local breweries and foreign bottled beer that, until recently, was difficult to find.

In the past, the local beer market was dominated by two local power brands: Cass and Hite - lagers which still account for more than 90 percent of the market. However, the recent trend among Korean beer drinkers has been to move away from these brands toward beers from overseas that have not always had a strong presence in the domestic market. 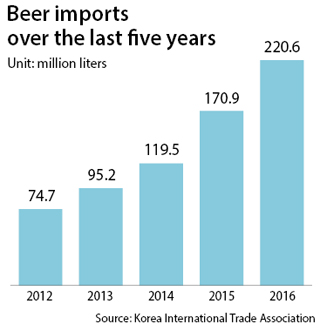 Between January and July this year, beer topped the list of alcohol imports for the first time, surpassing wine and the long-time No.1, whiskey, according to the Korea International Trade Association.

During this period, beer imports hit $143.9 million, a 50.5 percent increase year on year. The figure is notable considering it was only in 2014 that domestic beer imports first reached $100 million. For seven consecutive years since 2011, the growth rate has never fallen below 20 percent.

Imports of wine and whiskey, ranked second and third this year, were relatively sluggish with wine increasing a mere 4.6 percent compared to last year and whiskey imports declining 14.8 percent.

Japan and China were the top two exporters of beer to Korea, but smaller countries like Belgium and Ireland are rapidly increasing as ale, rather than lager, is becoming a popular drink among young consumers.

In volume, beer imports hit 220.6 million liters last year, almost a threefold increase compared to 2012’s 74.7 million. Industry insiders say the figure may reach up to 300 million for the first time this year.

One reason for the rapid increase in the popularity of imported beer is the promotional events at discount chains and convenience stores that offer bundles of beer from around the world at much cheaper prices, according to industry experts.

“Whereas in the past there were many consumers that didn’t bother to pay higher prices for [local] beer, the lowered prices at discount chains motivated them to at least try products they wouldn’t have otherwise,” said an industry source who imports an Irish beer brand.

Lotte Mart said the craft beer wave prompted a come-back for American beer, with its proportion among all global beer sales reaching 6.4 percent, an increase from 5.3 percent in 2015. The variety on offer has also increased from 46 to 69 in the same period.

“In the early stages of the global beer boom, local consumers were able to recall only a limited number of brands like Budweiser and Miller,” said Lee Young-eun, the head of Lotte Mart’s alcohol merchandising team

Meanwhile, Korea’s shifting trend towards craft beer has surfaced not only on local sales reports, but on those of other countries as well. According to the U.K.’s Food & Drink Federation, the country’s beer exports to Korea jumped more than 420 percent year on year to ￡59.3 million ($78 million), pushing the entire food and drink export revenue to Korea up by 77 percent.

“South Korea has become an increasingly important destination for UK beer exporters as young people get a taste for specialist brews such as Brewdog, following trends in the U.S. and Europe,” wrote The Guardian when it reported the increase in mid-August.

Indulge, official importer of Brewdog to Korea, reported a sales growth of 226 percent year on year during the month of July. It was in July last year that the company started official distribution of the U.K. beer nationwide, as well as taking charge of local marketing and sales activities.

A spokesperson for the brewery reported that Brewdog is on track to sell 3,000 hectolitres (79,251 gallons) of beer in Korea this year. The brand is planning to open a brewery in Asia in order to “help meet the crazy demand for awesome craft beer within the continent,” the spokesperson added.

“Recent statistics show that individuals’ alcohol purchases in Seoul are on the decline while the costs for eating out are increasing,” said Hong Jun-suk, brand manager at Indulge. “This proves that the culture of heavy drinking for stress relief is dying out and people are looking for a more value-centered consumption pattern.

“The craft beer trend falls in line with this because, in some ways, craft beer is similar to wine -there are various tastes and scents that consumers can enjoy. People nowadays want to escape from the limited local brands they’re familiar with and find new types that cater to different taste buds.”

The changing tastes of Korean consumers can also be seen in the rapid rise of local craft breweries. Bars and tap houses selling domestic craft beer have started gaining popularity over the last few years, fueling the creation of more breweries across the country. Popular Korean breweries include 7Brau, which received a bump after being chosen as the drink of choice for a recent Blue House event, and Korea Craft Brewery.