LG’s flagship V30 will be cheaper than Note8

LG’s flagship V30 will be cheaper than Note8 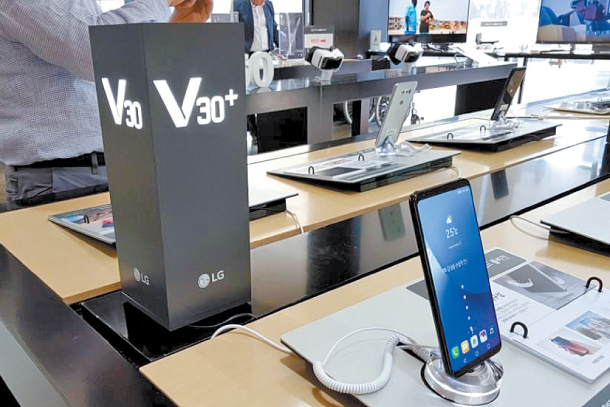 LG Electronics has set the price for its flagship V30 smartphone at just below 1 million won ($887) in a strategic attempt to get a price advantage over Samsung Electronics’ Galaxy Note8.

A V30 with 64 gigabytes of storage will carry a price tag of 949,300 won and a V30 Plus model with 128 gigabytes of storage will be 998,800 won. Speculation had been high that the new LG phones with the latest Qualcomm’s Snapdragon 835 application processor and OLED display will cost more than 1 million won after the world’s sixth-largest smartphone vendor by sales unveiled the two models at the IFA consumer electronics show in Berlin on Oct. 31.

Now, the price gap between the two flagship phones from the two biggest consumer electronics producers in Korea has widened to as much as 145,200 won for the same amount of storage (64 gigabytes) - quadruple the gap in the two direct predecessors released in the first half - the Galaxy S8 and G6 - which was 35,200 won.

“LG originally intended to sell the V30 for 990,000 won but mobile carriers proposed a lower price,” said an industry insider.

LG had initially planned to begin accepting preorders for the phones from Sept. 5-14 and deliver them on Sept. 15. It pushed the preorder period to Sept. 14-20 to avoid direct competition with Samsung. LG’s V30 will begin shipping on Sept. 21.

Note8 preorders kicked off on Sept. 7 and delivery and direct purchases at offline phone stores is scheduled for Sept. 15. The first day of preorders saw 395,000 prospective Note8 buyers, which easily surpassed the 380,000 units posted throughout the 13-day-preorder period for the Note7, which was released last August but eventually recalled because of flammable battery problems. There were 550,000 preorders for the Galaxy S8.

Carriers say most people who placed preorders for the Note8 chose to get discounts of up to 25 percent on monthly bills in return for signing a two year-contract. Earlier, the subsidies offered by mobile operators and phone manufacturers were bigger.

The government has raised the subscription discount ceiling from 20 percent to 25 percent, effective Sept. 15. A subsidy on the purchase price of a phone tops off at 150,000 won. By comparison, buyers opting for a 60,000 won basic monthly plan, an average level, can now get up to 390,000 won deducted from their phone bills over two years. The discount could total 660,000 won for a 100,000 won monthly plan over two years.

In a few weeks, the two Korean players will have to face competition from Apple, which is scheduled to introduce a special 10th anniversary iPhone Tuesday. According to the latest leaked iOS 11 firmware, the special edition will be named iPhone X instead of iPhone 8.

There are ample rumors that shipments of the iPhone X could be delayed owing to an OLED display supply shortage from Samsung. That could delay sales in Korea to as late as December. The new Apple phone is expected to cost more than $1,000.