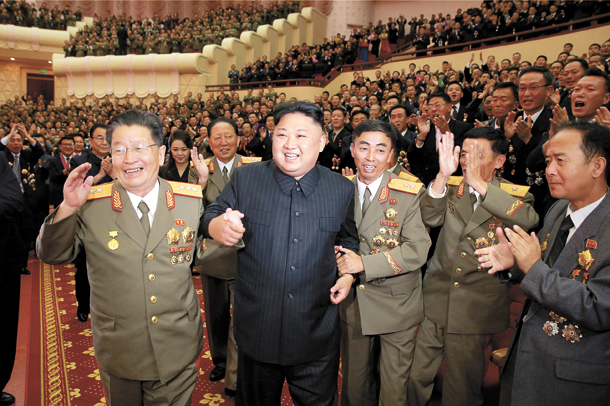 North Korea’s state-run media reported Sunday that a massive banquet was held in the country to celebrate the “perfect success” of a hydrogen bomb test on Sept. 3, quoting leader Kim Jong-un as encouraging crowds of participating scientists and technicians to “attain the final goal of completing the state nuclear force.”

The date and location of the event weren’t mentioned by the Korean Central News Agency (KCNA), but local experts expect it was held Saturday, as Kim’s activities are normally reported a day later.

Saturday is when the regime celebrated the 69th anniversary of its founding. South Korean authorities were bracing for another missile test that day after Suh Hoon, director of the National Intelligence Service, said last week that Pyongyang seemed to be preparing another missile test, possibly an intermediate-range or intercontinental ballistic missile aimed at a normal angle towards the northern Pacific. 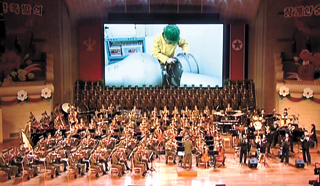 Korean Central TV Sunday shows a video played to a banquet audience that included Kim Jong-un and the country’s nuclear and missile developers. It featured a scientist assembling what appeared to be a hydrogen bomb. [YONHAP]

Local authorities said they didn’t spot any new provocations over the past weekend.

While airing footage from the banquet, Korean Central TV, the regime’s public broadcaster, showed what appeared to be a video clip of preparations for the sixth nuclear test Sept. 3, which featured scientists working next to an object that resembled a nuclear warhead, with the word “hydrogen bomb” inscribed on it in Korean.

The video clip, which was shown to an audience including Kim Jong-un and his wife Ri Sol-ju, then featured a shaky Mount Mantap, where the underground nuclear test was held.

Kim “called upon the reliable nuclear combatants of our [Workers’] Party to win greater victory with redoubled efforts,” said the KCNA report, “not slackening the spirit displayed by them in bringing the great auspicious event of the national history.”

In line with the country’s simultaneous push for economic development and the building of a nuclear force, Kim pushed the North’s scientists and technicians to “conduct scientific researches for bolstering up the nuclear deterrence of self-defense.”

South Korean authorities said further study was needed to determine whether North Korea detonated a hydrogen bomb last week as it claimed, but the Nuclear Safety and Security Commission said Friday that it found traces of radioactive xenon gas in the East Sea, which doesn’t occur naturally.

The commission has yet to say whether that was linked to the North’s nuclear test, saying the amount of the xenon-133 was too small to know for sure. That, along with other substances, are usually needed to figure out whether North Korea carried out a hydrogen bomb test.

A vote for more sanctions on the North Korean regime will likely be held in the coming days by the United Nations Security Council, where the U.S. has circulated a draft resolution that bars crude oil shipments to the country and the hiring of North Korea’s roughly 50,000 overseas workers, as well as a freeze of Kim Jong-un and his government’s assets.

Last week, a bipartisan group of U.S. lawmakers in the House of Representatives condemned the North’s threat against the U.S. territory of Guam in a joint resolution. Along with 21 co-sponsors, Rep. Madeleine Bordallo, a Democratic delegate of Guam, introduced the resolution to the House Armed Services Committee and Committee on Foreign Affairs, saying it supports “forward deployment of missile defense systems as necessary to protect the territorial integrity” of the U.S. and its allies in the Asia-Pacific region.

The Philippines took a bold step last Friday when it announced the total suspension of trade relations with North Korea, giving up on nearly $28.8 million worth of exports to the isolated country, according to last year’s figures from South Korea’s Korea Trade-Investment Promotion Agency.

Foreign Minister of the Philippines Peter Cayetano said the move was a show of Manila’s full support for UN Security Council resolutions.