Moon is ripped into on Thaad

Moon is ripped into on Thaad 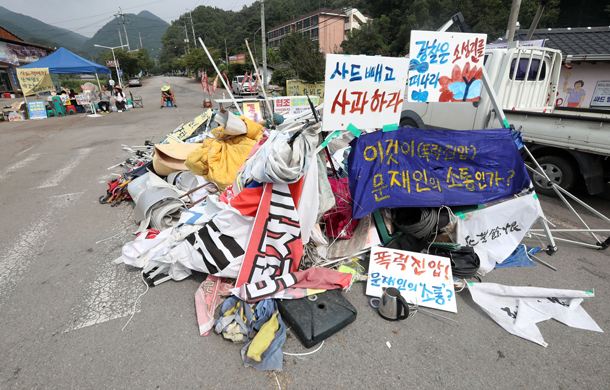 Pickets and banners used during a rally on Wednesday against the deployment of the Terminal High Altitude Area Defense antimissile system in Seongju County, North Gyeongsang, remain piled in front of Soseong-ri town hall in the county on Sunday morning, broken and torn during the protesters’ scuffles with police. [YONHAP]

“The administration decided the deployment of the Thaad system cannot be postponed anymore, at least for now, to stop any war from breaking out on the Peninsula and for the safety of the people,” Moon said in a written statement. “It is the best possible option we can take now at this point as North Korea continues to develop its nuclear weapons and missiles; we have to do what we can to defend this country and I ask for your understanding.”

“All he did was issue one written statement in the night, when people expected him to answer their questions in person,” said Rep. Khang Hyo-shang, spokesman of the LKP. “His statement repeatedly describes the Thaad deployment as ‘temporary’ or ‘for now’ and the administration is simply trying to shirk the responsibility of taking any side.”

He added, “Also, Moon didn’t apologize for how the deployment process and the stalled decision have affected the security of the country. The statement is filled with excuses for those who oppose the Thaad deployment in and out of the country.”

The opposition Bareun Party’s spokesman Park Jeong-ha said, “Moon failed to explain how his stance on Thaad changed from when he was a presidential candidate to now. He called the deployment a temporary one, but didn’t explain what kind of processes would follow from here.”

Four launchers for the Thaad antimissile system were moved to a U.S. base in Seongju County, North Gyeongsang, on Thursday, completing the deployment of the American antimissile battery.

In a statement on Thursday, the Ministry of National Defense said the deployment was a temporary measure to counter North Korean threats, and that a full-scale government environmental study will be needed before the deployment is authorized as permanent.

“The Thaad deployment was an inevitable decision,” said Rep. Son Kum-ju, spokesman of the People’s Party. “But it is unfortunate that the president had to decide on the complete deployment of Thaad while he was abroad and that a scuffle broke out between some Seongju residents and police, which resulted in some injuries.”

Moon was in Russia to attend the Eastern Economic Forum and meet with Russian President Vladimir Putin when the launchers were moved to the Thaad site.

Some 500 protesters, including local villagers and anti-U.S. activists, gathered outside the base in Seongju on Wednesday evening to try to stop the deployment. They used about 30 vehicles to block the road. About 8,000 South Korean police troops were dispatched to the village to remove them.

Just before midnight, the police started an operation to end the protest. About 30 people, including 20 protesters, were injured in the scuffles that broke out and sent to nearby hospitals.

“Moon is deceiving himself and mocking the people in calling the Thaad deployment a temporary one,” said an association of civic groups opposing the deployment in a written statement on Saturday. “The only solution to the Thaad issue is a complete scrapping of it.”

The association said it will host meetings Sunday and today to decide its next course of action.