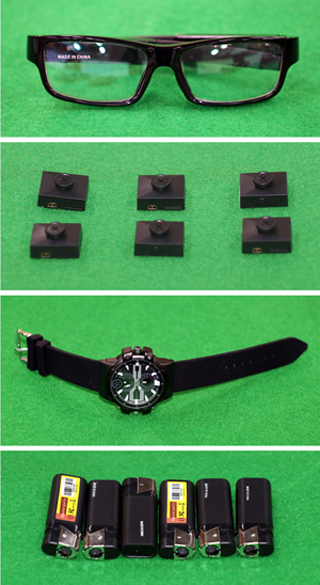 Miniature cameras, some as small as 2 millimeters (0.07 inches) in diameter, can be installed on everyday objects like glasses, buttons, watches, pens and cigarette lighters. [YONHAP]

Police announced Friday that they investigated 301 camera companies to follow up on President Moon Jae-in’s directive to crack down on illegal use of spy cameras last month.

Police said they investigated the companies with Central Radio Management Service, a government agency affiliated with the Ministry of Science and ICT, and found seven that violated the Radio Waves Act. Four were charged, two fined and one let go with a warning. Some 60 devices were confiscated on the same day.

Article 84 of Radio Waves Act states that “a person who displays, keeps, or transports equipment which has failed to undergo conformity assessment, for the purpose of selling or leasing it out, or installs such equipment in a radio station or a broadcasting and communications network” can be punished by a sentence of up to one year in prison or by a fine of less than 10 million won ($8,826).

A conformity assessment by the government is needed for any equipment that may cause electromagnetic interference or produce electromagnetic waves that may have an affect on humans or other devices, the law states.

Some spy cameras have a wireless function that allows their owners to receive video or photos without visiting its site, which means the cameras send out radio waves.

Miniature cameras - some as small as 2 millimeters (0.07 inches) - have been found by authorities in public bathrooms, usually installed inside the toilet stall, sometimes in the toilet paper dispenser.

Authorities find them by using a device which detects radio waves.

The Act on Special Cases Concerning the Punishment, etc. of Sexual Crimes states that “a person who takes photos of another person’s body, which may cause any sexual stimulus or shame against the latter’s will, by using a camera or similar mechanism, or who distributes, sells, leases, provides, or openly exhibits or screens the photos so taken, shall be punished by imprisonment for not more than five years or by a fine not exceeding 10 million won.”

Moon on Aug. 29 ordered his administration to come up with measures to crackdown on electronic Peeping Toms, according to Blue House spokesman Park Soo-hyun. He ordered the same in a Cabinet meeting on Aug. 8. As a candidate in the presidential election, Moon had promised to establish a license system for production and transportation of spy cameras so that only companies with government permits can make and transport them.

The Korean National Police Agency said in response last month that it will sweep public bathrooms and other facilities to detect spy cameras this month; investigate companies producing and retailing them for possible illegalities; and crack down on illegal pornographic websites. A comprehensive government response to prevent crimes related to use of spy cameras is under review, said the Blue House.