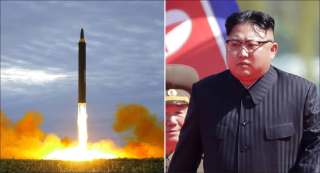 Kim Jong-un, chairman of North Korea’s Workers’ Party, seems to have no intention of stopping his nuclear and missile programs. The nuclear and missile threats continue as the launch of the ICBM-level Hwasong-14 in July was followed by the sixth nuclear test on Sept. 3.

There were concerns of additional provocations for the 69th anniversary of the founding of North Korea on Sept. 9. Since North Korea conducted the fifth nuclear test for last year’s anniversary, a similar provocation was expected. Fortunately, it did not happen. Yet the toughest-ever UN resolution for additional sanctions is scheduled, and Oct. 10 is the 72nd anniversary of the founding of the party. So we cannot ease up just yet.

In January 1990, Kim Jong-il put a gun and a stash of U.S. dollars on the table and asked the executives of the Workers’ Party Central Committee which one they would choose. Their opinions were divided. Those who chose dollars said that they could buy guns with money.

Others said that they preferred the gun because they could take money if they were armed. Kim told those who chose the gun, “That’s what I wanted to hear. It is the reason why we sacrifice economic development to make nuclear weapons and missiles.”

Kim Jong-un wishes to continue his father’s legacy and complete the project. In 2012, on the 100th anniversary of the birth of Kim Il Sung, Kim Jong-il wished to open the “gate to the powerful and prosperous country,” but his wish did not come true. He meant to build an ideologically, politically, militarily and economically powerful nation. Kim Jong-un pushes for that goal by hoping to deploy nuclear weapons and missiles by 2019 and then focusing on economic development.

The Moon Jae-in government is not capable of stopping Kim Jong-un or steering him from this choice, and neither are the United States, China, Japan or Russia. The entire world has been trying to solve the North Korean nuclear and missile issue for over 20 years, but all attempts have failed. Now, it is about time we consider how to end this issue rather than solve it.