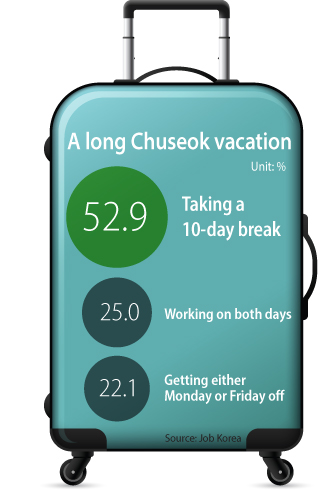 A survey from Job Korea revealed that a little more than half of Korean office workers will enjoy a 10-day Chuseok break, after the government announced last week that it would designate Oct. 2 as a temporary holiday.

According to results released Monday, 52.9 percent of the 1,231 office workers that replied to the job portal’s survey will get a day off on both Oct. 2 and Oct. 6 - also not an official holiday, but an alternative for Korea’s National Foundation Day on Oct. 3, which overlaps with Chuseok this year.

On the contrary, one fourth of survey participants said that they will have to work on both temporary holidays.

Answers greatly differed according to the respondents’ affiliated company. Among employees at major companies or conglomerates, 72.5 percent said they will have both days off, whereas only 48 percent of those working at small or mid-sized companies said they would get the extra holiday.

The percentage of SME workers who are to work on both temporary holidays was also double that of major company employees at 27.8 percent versus 13.8 percent. The majority of this unlucky group - 71.6 percent - said they will not use their annual leave to bridge the holidays.

Most employees that will enjoy a day off on one of those two temporary holidays, 68.9 percent, said that it would be paid leave.

Meanwhile, 33.9 percent of all survey participants said they will be working during the official Chuseok holiday, between Oct. 3 and 5, among which 77 percent said that it was due to their company’s rules. The other 23 percent said the decision was voluntary due to work load.

The main reason for the Moon administration designating Oct. 2 as a one-off holiday was to boost consumer sentiment and stimulate the local economy.

The extra day off on Monday Oct. 2 connects the previous weekend to the three-day Chuseok holiday on Tuesday, Wednesday and Thursday, the additional holiday on Friday, the following weekend and another national holiday to celebrate the creation of hangul, the Korean alphabet, at Oct. 9; this brings the total vacation period to 10 days.

However, there were mixed views on how much people will actually be able to enjoy that period as a whole, because the measure was only obligatory for start-run institutions. Job Korea’s survey results combined with public reactions online and local news reports suggest that the 10-day holiday is not likely to massively impact SMEs that operate factories or work on a tight budget.