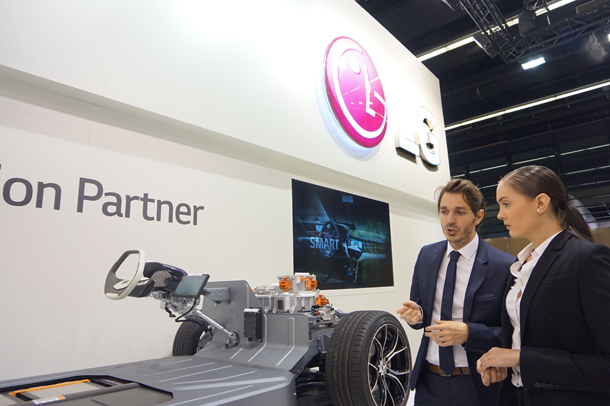 The LG Electronics booth at the Frankfurt Motor Show, which will display the company’s key automotive parts between Sept. 12 and 15 in Germany. [LG ELECTRONICS]

LG Electronics is participating in the 2017 Frankfurt Motor Show for the first time to showcase its automotive components. The biannual international auto fair that alternates with the Paris Motor Show kicks off Thursday.

LG will run a booth open only to corporate clients - automakers - between today and Friday, where core auto parts will be on display. Affiliates LG Chem and LG Hausys will also join the electronics firm to showcase their products - batteries for electric vehicles, automotive displays and materials for the interior and exterior of vehicles - under the “innovation partner” theme. Samsung Electronics is not going to be present at the German show.

The products LG is poised to show include automotive infotainment devices such as audiovisual navigation and central display, autopilot-related equipment such as LCD dashboard and advanced driver assistant systems solutions-enabled cameras, and driving motors, inverters, electric compressors and battery heaters for electric vehicles.

The nation’s second-largest consumer electronics producer, after Samsung Electronics, has been seeking to boost its automotive parts business with an emphasis on electric vehicles in the belief that the next wave of growth in the industry - both automobiles and IT - will come from technologies for autonomous driving, connected cars and electric vehicles.

LG began with the Beijing Motor Show in 2014 and has thus far taken part in top-tier international auto shows across Shanghai and Detroit.

“We have come to expand connections with customers by participating in the show that leading global automakers will be attending,” said Lee Woo-jong, head of vehicle component business at LG Electronics. “We will continue unveiling advanced automotive component technologies to help carmakers’ competitiveness.”

But the company has consistently said it does not aim to become a full-fledged automotive manufacturer.

“We haven’t even considered producing automobiles,” said an LG insider, adding such allegations may confuse its clients.

LG, which has been losing its share in the highly saturated smartphone market and has slumped to sixth place worldwide, recently came up with a plan to invest 28.5 billion won ($25.2 million) to build a factory for electric vehicle components in Michigan.

The company is also in talks with Austrian automotive light producer ZKW, jointly with its affiliate LG Corp, for an estimated acquisition price of nearly 1 trillion won - the biggest deal for any affiliates under the LG umbrella.