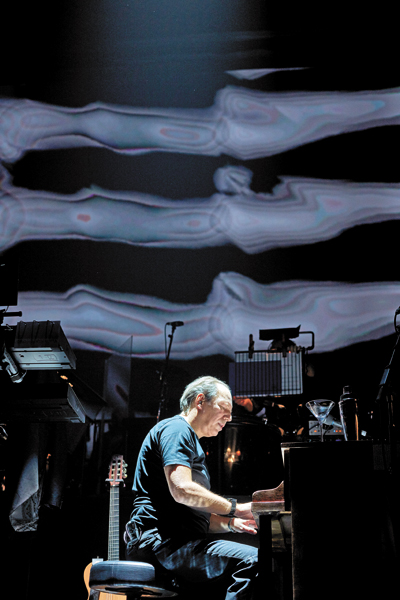 Hans Zimmer, the Oscar-winning film score composer behind dozens of films, says he hasn’t been on stage since the ’70s, when he performed as the keyboardist in a heavy metal band that didn’t last long. That is, of course, because he’s been inside a studio ever since, writing music for countless films ranging from “The Lion King” and “Pirates of the Caribbean” to “The Dark Knight,” “Inception,” as well as Christopher Nolan’s most recent World War II epic, “Dunkirk.” But above all, he chose not to perform in front of a crowd because the legendary composer has stage fright.

Nevertheless, he put his fears behind him and kicked off a world tour with 19 musicians last year, performing a set list that spans almost three decades of soundtracks. The courage comes from an attempt to bring music forward, outside the films, so that “film music can be celebrated as well,” Zimmer says. That is why Zimmer’s live show has no screen projecting the films. It’ll only be musicians and Zimmer, flitting through a keyboard, a piano and a guitar.

The German composer’s Seoul concert, which will be his first stop in Asia and his final tour destination, takes place on Oct. 7, at the Olympic Stadium in Jamsil, southern Seoul. The concert will be presented as part of festival organizer Private Curve’s newly launched festival called “Slow Life Slow Live.” Zimmer will perform in the second part of the festival, while another renowned film music composer Justin Hurwitz, who made a name for himself with scores for films like “La La Land” and “Whiplash,” will start the festival at 4:30 p.m. Tickets to the festival can be purchased via Melon Ticket at ticket.melon.com and cost 135,000 won ($119).

This self-taught composer’s vast oeuvre makes it difficult to pin down exactly what film genre he specializes in. The 59-year-old composer’s first big success was with 1988’s “Rain Man,” and he has churned out dozens of soundtracks since. He has taken home four Grammy Awards, two Golden Globes and one Academy Award over the course of his career.

Before the legendary composer arrives in Seoul, the Korea JoongAng Daily caught up with him for an interview via email as he wrapped up his U.S. tour. The following are edited excerpts from the interview.

Q. “Dunkirk” is the sixth collaboration you have done with director Christopher Nolan. Why have you worked with him so much?

A. A lot of film composers meet filmmakers who you just communicate well with. Chris and I can visually and sonically tell the same story very well, and push each other to better the story. He’s a great storyteller. One time, Chris said to me, “Hans, I will write one page of text for you. And you will give me just one day. Just write whatever comes to you from this one single page.” It wasn’t about the film. In a peculiar way, what Chris wrote down that day, and what he wanted from me, had more to do with my story than the plot of the movie. He knows how to get under my skin. That’s the game we play.

The concert in Seoul is the last stop of your world tour. What do you plan to do when you go back home? Is there a film waiting for your music?

I actually only have one number in my head right now, which is 42,239 miles. That’s how long it’s been since I’ve been on tour. All I can think of right now is that I need to take a break. Really, for the first time in my life, I need a break. Most people don’t expect me to take a break, but this time, everyone is. I’m going to take two weeks off, and then I can think about the music. I am sort of, a little bit, working on a movie, but not really. So, for the first time in my life, I am not going to be in the studio. It’s very unusual. I’m never not in the studio. So, you caught me at a very unusual point in my life. It’s really an oddity, I love being in the studio.

How do you select what movies to compose music for?

Filmmakers are great storytellers. It all starts the same way. Somebody says “Hey, I have a story to tell you.” And then, if it’s a good one, they’ll take you on this journey through their story. Imagination starts, and that’s when I start to get ideas. And that’s what makes me want to be a part of the story. Usually, the most important thing is also the people you work with. People that I’m lucky to be working with are people that are interesting, and some of the great storytellers, telling authentic stories. And the other part is the musicians. I love what the musicians bring to the table.

There are rumors that you are retiring from composing songs for superhero movies. Why?

Oh, I might as well say it. I have officially retired from the superhero business. It’s just me. I started to find that this one was very hard for me to do - to try to find new language.

Looking back to nearly three decades of your career, what bothers you the most about your job and what do you like about it the most?

There is [something,] but it’s not an essential thing, that bothers me a lot. Mostly it’s my own shortcomings. Thinking back, I wish I had paid more attention in school. I wish I had gone to music school. I mean all the things that could’ve been. Every movie I work on, I wish I had done a better job. I wish I had more time. It’s always time. Time always runs out. I have too many ideas and not as much time to bring it to fruition. I really enjoy the story. I love getting to see things and live the life as the characters - and I always learn. For instance, for “The Da Vinci Code,” I actually spent a lot of time getting to know the paintings mentioned in the Da Vinci Code, and the history, so I could portray the music that told the story of the movie.