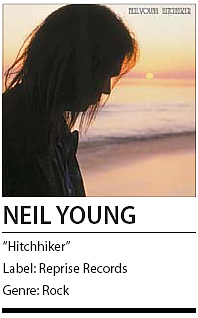 In 1976, Neil Young walked into a Malibu recording studio, armed with his acoustic guitar and harmonica, and laid down a bunch of tracks in a single session.

They sat unreleased for more than 40 years.

Dubbed “Hitchhiker,’’ the 10-track archival release is a treasure trove for Young fans with two previously unreleased songs and intimate renditions of some of his best-loved tunes.

One of those, “Powderfinger,’’ takes on a much more haunting tone than when it was officially released in 1979 with the full force and weight of Crazy Horse’s electric mayhem behind it. Two other songs that also later showed up on 1979’s “Rust Never Sleeps’’ get an early run-through here: “Ride My Llama’’ and “Pocahontas.’’

No studio versions of “Hawaii’’ or “Give Me Strength’’ - a standout on “Hitchhiker’’ that Young has occasionally performed live - have made it out of the vault before.

“Captain Kennedy’’ didn’t make it onto a record until 1980, while the title track had a much longer wait. It didn’t appear until 2010’s “Le Noise,’’ and then in a dramatically altered form. AP