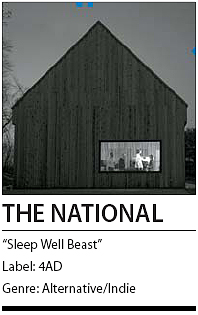 The world’s best rock bands are built on unique blends of talent and sound that set them apart from all of the others who strap on guitars and blister fingers in basements. And few bands have soared higher or set themselves apart more distinctively than The National, which exploded out of Cincinnati nearly two decades ago.

With “Sleep Well Beast,’’ the band’s seventh studio album and first in four years, The National revives the distinctive vibe that led it to the forefront of 21st century arena rock bands. Familiar or not, these guys are good at what they do.

Pulsating bass and drums set a forward-leaning foundation for the band’s polished guitar-keyboard mix. Together they convey urgency, transporting listeners through mostly dark lyrics past a sonic backdrop that offers hope mainly because it’s on its way somewhere.

What takes the band higher, ultimately, is Matt Berninger’s charisma. Not since Bryan Ferry’s heyday has a singer seemed to have stepped so vividly from the pages of a Raymond Chandler story.

The heartache is palpable. So is the tragic hero’s cool remove. AP