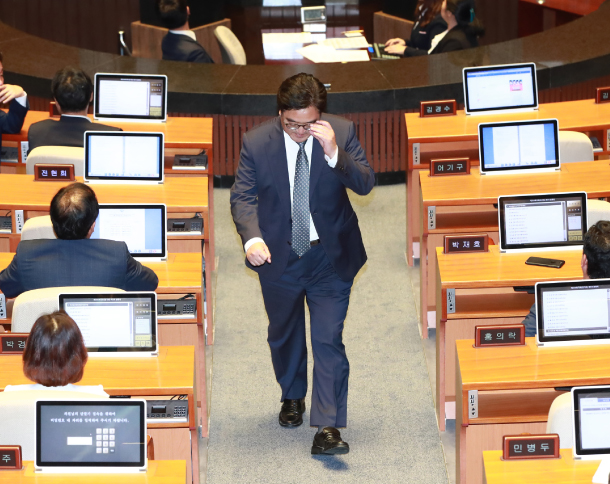 Rep. Woo Won-sik, floor leader of the ruling Democratic Party, returns to his seat after consulting with Assembly Speaker Chung Sye-kyun as the National Assembly on Monday struck down a motion to confirm President Moon Jae-in’s nominee to head the Constitutional Court. [YONHAP]

The National Assembly on Monday struck down a motion to confirm President Moon Jae-in’s nominee to head the Constitutional Court, as the ruling party failed to win the crucial few votes from the opposition.

The National Assembly held a long-delayed vote on the motion to confirm Constitutional Court Justice Kim Yi-su, nominated in May as the new head of the court. Of the 293 lawmakers who attended the session, 145 voted to support Kim’s appointment and 145 opposed, while one lawmaker abstained and two votes were counted invalid. Two votes shy, the motion was voted down.

Moon nominated Kim to head the court on May 19. Kim joined the court in September 2012 at the recommendation of the then-opposition Democratic Party. He has been the most liberal member of the nine-member panel.

It was the first time that a president’s nomination for a Constitutional Court chief justice was struck down by the legislature. Kim was also the first nominee of Moon to fail to pass a confirmation vote.

Using his authority, National Assembly Speaker Chung Sye-kyun introduced the motion despite resistance by the opposition Liberty Korea Party and Bareun Party. Because the two conservative parties voiced their opposition, winning the People’s Party’s votes was crucial for the ruling Democratic Party to secure the majority. As of Monday, the Democratic Party and its progressive allies, including the Justice Party, together control only about 130 seats in the 299-member legislature.

The People’s Party reportedly allowed a free vote for its 40 lawmakers, and the majority apparently voted against Kim. People’s Party Chairman Ahn Cheol-soo, defeated by Moon in the May presidential election, said, “We have the decision power in the 20th National Assembly.”

The Blue House issued a statement to condemn the opposition lawmakers. “What happened today at the National Assembly will be remembered as an act of extreme irresponsibility and an opposition for the sake of opposition,” said Yoon Young-chan, senior presidential press secretary.

He also said the Blue House never imagined the opposition parties would vote down Kim’s confirmation, despite their repeated attempts to link the vote with other political matters, because the nominee had no serious flaws.

“The Constitutional Court will remain headless,” he said, “The people know the best who is responsible for this situation.”

Jun Byung-hun, senior presidential political secretary, also condemned the opposition, particularly the People’s Party. “It was the abuse of majority,” he said. “The National Assembly must not become an arena of a contest to show off the casting vote.”

The Constitutional Court’s chief justice, Park Han-chul, retired from the post on Jan. 31 during the impeachment trial of President Park Geun-hye. Justice Lee Jung-mi took over the role as the acting chief and completed it, but her term ended in March.

While Lee’s vacancy was filled by the Supreme Court chief justice with the appointment of Justice Lee Seon-ae, Moon’s attempt to fill the remaining vacancy failed earlier this month. Lee You-jung gave up the nomination over the large amounts of money that she made on the stock market.

Because one seat from the president’s quota remains vacant, Moon can name the candidate also as the chief justice. The chief justice must have more than 15 years of career experience as a judge, prosecutor or lawyer and must be over 40 years old.

The chief justice must be among the incumbent judges of the court. Five of the current panel are considered conservative; two were appointed by Moon’s predecessor Park, and another, by her ruling party.

Justice Kim will remain on the bench until the end of his six-year term in Sept. 19, 2018. It remains to be seen if he will continue to serve as the acting justice. “Under the current law, Moon can nominate him again, but the possibility appeared to be low because of the high political burdens,” a court official told the JoongAng Ilbo.