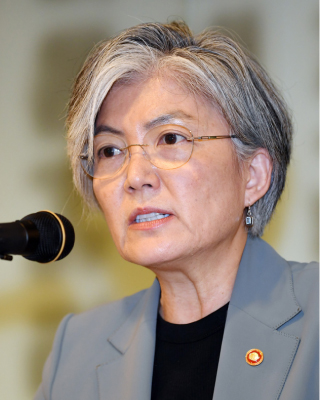 South Korean Minister of Foreign Affairs Kang Kyung-wha told foreign correspondents in Seoul on Monday that North Korea’s sixth nuclear test has triggered a reassessment of the current security situation and underscored the need for new sanctions that would result in “significantly heightening the economic pressure” on the regime.

“The North Korean nuclear issue remains the biggest challenge on our foreign affairs and security front and most likely will continue to be so for many years to come,” Kang said to reporters at the Seoul Foreign Correspondents’ Club at the Press Center in central Seoul.

She added, “The price of its continued provocations, in blatant disregard of the peace-loving members of the international community, will be instability and economic hardship.”

She said Seoul has been clear in its consultations with the United States that curtailing the North’s oil supply “has to be included as an element of sanctions” in the latest UN Security Council resolution, set to be voted on Monday New York time. This could be a complete halt on the shipment of oil into North Korea or some level of reduction, which she said would be “a matter of discussion between the council members.”

Kang said she believes that this final text of the newest UN Security Council resolution “adopted by consensus will hopefully have significant consequences in terms of greater economic pressure on North Korea.”

She added, “I think there is always the possibility for further provocation from North Korea, and we watch the situation very closely, especially on key landmark days, but we also make sure that the message is delivered to North Korea about the unacceptability of these provocations, and the Security Council discussions are exactly that.”

She said, “The sixth nuclear test was a factor that has forced us to reassess the situation. We have always said that provocation means further pressure and sanctions.”

Kang added, “The symbolic and strategic significance of this test is greater than any previous provocations, and that is what’s triggering reassessment of the situation. I can’t go into the details of what that is specifically, but it certainly heightens the level of threat that the North Korean nuclear and missile threat poses.”

The minister reiterated Seoul’s goal of complete, verifiable, irreversible denuclearization of the Korean Peninsula in a peaceful manner, adding getting North Korea to the negotiating table “will take greater pressure.”

She continued, “Once at the table, it will take patience and many rounds of negotiations to reach some kind of agreement. It will take much more time to make whatever is agreed to be implemented and verified.”

She said that President Moon Jae-in will consider sending a special envoy to North Korea “given the right circumstances and as a tool to elicit a positive change in North-South relationships. However, it is questionable whether the circumstances are right at this point.”

This marks the first Korean foreign minister’s briefing with foreign correspondents to Seoul in some nine years.

Likewise, Kang said the government is not considering the redeployment of American tactical nuclear weapons to the Korean Peninsula.

“We are currently not reviewing the issue of deployment of tactical nuclear weapons,” Kang said, either on the government level or through negotiations with the United States. “We are a model citizen when it comes to denuclearization in accordance with NPT (Non-Proliferation Treaty) and other nonproliferation norms.”

However, she added on the redeployment topic, “We do know that the public opinion is swinging in that direction, so we watch that very closely. But if it comes to a situation where we feel this is an issue that needs policy consideration, there are many elements to consider, beyond the military and strategic value of this issue - the regional and global political context, the nonproliferation norms, and Korea’s profile in the nonproliferation norm, and of course denuclearization being the fundamental rationale we are promoting and pursing.”