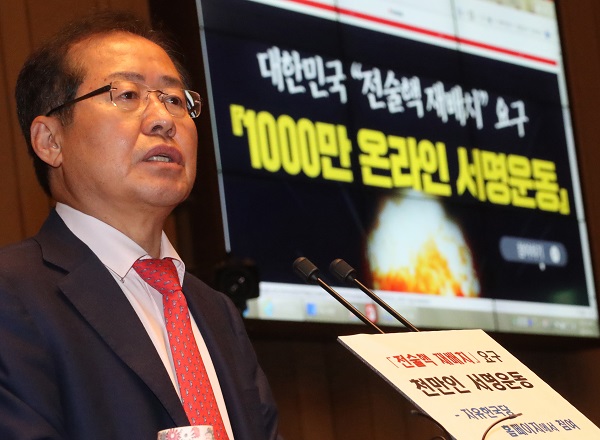 Hong Joon-pyo, chairman of the Liberty Korea Party, announces in the National Assembly on Monday that the party kicked off an online campaign to collect 10 million signatures to demand the redeployment of American nukes in South Korea. [YONHAP]

The Liberty Korea Party (LKP) kicked off an online campaign to collect 10 million signatures to demand the redeployment of nukes in South Korea after more than 25 years. LKP Chairman Hong Joon-pyo, who was defeated by President Moon Jae-in in the May election, was the first to sign the petition.

“We are enraged by the failure and incompetence of the Moon administration’s national security policy,” the conservative opposition party said in the mission statement of its campaign. “For 50 million people to stop being used as nuclear hostages, redeployment of tactical nuclear weapons is the only way.”

The conservative opposition party appeared to be buoyed by growing public support for a nuclear-armed South Korea. A poll conducted last week by the Korea Society Opinion Institute showed that 68.2 percent of the respondents want the redeployment of tactical nukes, while 25.4 percent said they oppose the idea.

The party will also hold events nationwide to push for a nuclear-armed South Korea starting Friday in Daegu. It will send a letter to U.S. President Donald Trump and dispatch a delegation to Washington to urge the redeployment. Rep. Lee Cheol-woo, chairman of the National Intelligence Committee, will head the group, which will leave on Wednesday.

Hong went a step further to argue that the South must develop its own nuclear arms if the United States refuses to redeploy the weapons. “It won’t take long for us to have nuclear arms compared to the North,” Hong said. “To defend our country and our people, a nuclear-armed South Korea is inevitable.”

The minority conservative opposition Bareun Party supported the idea of a nuclear-armed South Korea. “If the North has a nuclear capability, we need tactical nukes to deter its use,” said Rep. Joo Ho-young, floor leader of the party.

“The North already broke the promise of a nuclear-free Korean Peninsula, and it is ridiculous for us to be obsessed with denuclearization. We want Moon’s bold decision on this issue.”

The People’s Party is split. While some lawmakers support the idea as a bargaining chip in negotiations, other lawmakers such as Park Jie-won and Chung Dong-young oppose it.

The ruling Democratic Party condemned the idea. “The controversy will give an undesirable impression to the world that we no longer have the will to resolve the situation politically and diplomatically,” said Rep. Choo Mi-ae, chairwoman of the Democratic Party.

“A nuclear-armed South Korea will trigger a domino effect of a nuclear Taiwan and a nuclear Japan,” said Rep. Kim Jong-dae. “It will look like all students are armed with guns and gathered in one classroom.”

A tactical nuclear weapon, designed to be used against battlefield targets, generally travels short ranges and carries a low-yield warhead. A strategic nuclear weapon, on the other hand, has a high-yield warhead, travels farther distances and is aimed at military bases or cities in a premeditated war plan.

The South joined the international treaty, aimed at preventing the spread of nuclear weapons and weapons technology, in 1975. North Korea joined it in 1985.

The 1992 inter-Korean joint declaration was effectively invalidated by the North’s pursuit of nuclear weapons including six nuclear tests.

The North’s constitution now stipulates that it is a nuclear state. Pyongyang declared in 1993 that it would walk out of the Nuclear Nonproliferation Treaty, triggering the first nuclear crisis. In 2003, it again announced its decision to abandon the treaty, admitting that it was operating a clandestine program during denuclearization negotiations.

Experts said the redeployment of tactical nuclear weapons in the South would not be a violation of the Nuclear Nonproliferation Treaty because the United States is already a nuclear state.

The United States currently has two types of tactical nukes – B61 nuclear bombs that can be dropped from fighter jets and W80 warheads that can be mounted on the Tomahawk cruise missiles. Among them, B61 bombs are the weapons most likely to be deployed to the South because Tomahawk missiles have ranges over 1,250 kilometers (777 miles) and China would react furiously to their deployment.

According to the Federation of American Scientists, the United States had 500 B61 bombs as of late 2016.
“I was told that Washington is having a serious internal review on weakening the nuclear seal on South Korea,” said Kim Hyun-wook, a professor at the Korea National Diplomatic Academy.

If the South decides to go with its own nuclear weapons, it is capable of doing so fairly quickly. “With the current technology, the South can produce a nuclear bomb with a yield of up to 100 kilotons within a minimum of six months,” said Suh Kune-yull, a nuclear engineering professor at Seoul National University. The North’s sixth nuclear test on Sept. 3 was estimated to have a yield of 50 kilotons.

According to Suh, Japan, which has reprocessing facilities, would take just three weeks to go nuclear.

As the debate continues in Seoul, a senior U.S. politician said Sunday in Washington that the United States should seriously consider the option of redeploying tactical nukes in the South.

“The Korean defense minister just a few days ago called for nuclear weapons to be redeployed. We had them there once in South Korea,” said Senator John McCain (R-AZ), chairman of the Senate Armed Services Committee, in an interview with CNN. “I think it ought to be seriously considered.”

The Blue House has insisted that the South Korean government stands by its original position that U.S. tactical nukes would not be allowed on domestic soil, denying any discussion with the United States on redeployment.

Media reports were made, however, that Defense Minister Song Young-moo during his visit to Washington at the end of last month, raised the issue with top security officials including Defense Secretary James Mattis and White House National Security Advisor H.R. McMaster.

Before the National Assembly on Sept. 4, Song also said U.S. tactical nuclear weapons “could be one option” but quickly added that the allies “will have to give further thought” to that idea because it was a “difficult” issue.