Jeonbuk Hyundai Motors midfielder Lee Seung-gi had the home crowd on its feet Sunday when he scored three goals in the first 21 minutes of the team’s match against Gangwon FC at Jeonju World Cup Stadium, putting him among the fastest players in the Korean league to pull a hat trick in a single game. 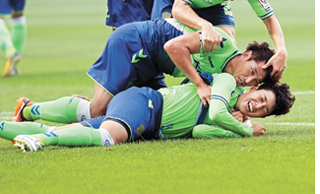 Lee Seung-gi, on the ground, celebrates with teammates after scoring a hat trick during the Jeonbuk Hyundai Motors’ match against Gangwon FC at Jeonju World Cup Stadium on Sunday. [YONHAP]

Lee scored his first goal in the 14th minute and two more in the next seven minutes. “After I scored the first goal, I didn’t know I would score additional goals in such a short period of time,” Lee said. “As I was given more opportunities, I scored more goals. My kick for the second goal was more like a cross, but it somehow turned into a goal.”

Ze Carlos, formerly of Ulsan Hyundai FC, and Ko Kyung-min of Busan IPark held the K League record for time between the first and third goal at 10 minutes.

Based on the amount of time into a match, Lee’s 21-minute hat trick is good enough to be ranked second in K League history, after Kim Dong-chan of Seongnam FC who scored three goals in the first 18 minutes of a match in August 2011.

Overall this season, Lee has been scoring more goals. “During winter training, head coach Choi Kang-hee set a season target of seven goals for the side attackers,” Lee said. “With the hat trick, I’ve scored six goals, so in the remaining matches, I’ll be motivated to score more goals.”

His stellar performance has spurred rumors that he might be called up to represent Korea in next year’s FIFA World Cup in Russia, but Lee himself is well aware that one good match won’t be enough to earn him a spot on the national team. Lee’s goal for now is to solely focus on his team, Jeonbuk.

The 29-year-old Gwangju native made his K League debut with Gwangju FC in 2011 and transferred to Jeonbuk in 2013. After two seasons with Jeonbuk, Lee spent some time with Sangju Sangmu, the military club, as part of his mandatory military service and returned to Jeonbuk at the end of last season.

But right when he was about to compete for a spot in Jeonbuk’s starting lineup this season, Lee suffered partial tear in his ACL after he was tackled by an opponent during Jeonbuk’s match against the Suwon Samsung Bluewings on March 11, resulting in a lot less playing time.

“When I returned from the military, there were more Jeonbuk fans,” Lee said. “There are probably more fans who haven’t watched me play before. Though the injury limited my playing time, I’ve slowly brought up my condition by consistently playing in matches. Until the end of the season, I want to keep on playing without getting any injuries and help Jeonbuk win.

“Although we are first in the K League Classic, it can easily get taken away by the second or third ranked-team if we are caught off guard,” Lee added. “We’ll be working hard until the end for a victory.”