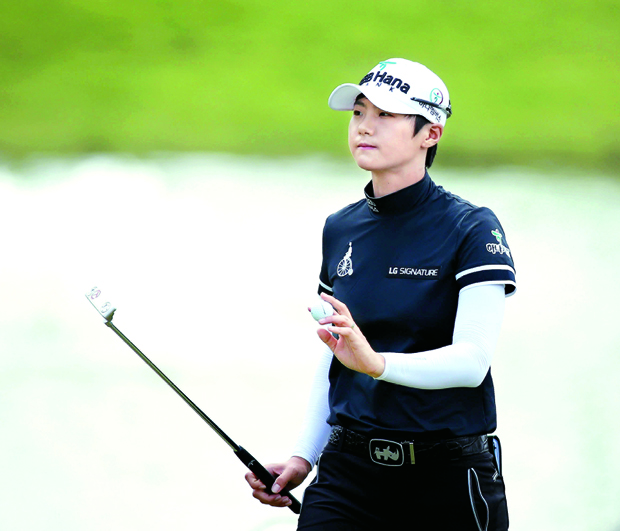 Park Sung-hyun waves to fans after making a birdie during the final round of the HSBC Women’s Champions at Santosa Golf Club in Singapore in March. [LG ELECTRONICS]

Park Sung-hyun finished tied for second at the Evian Championship last year, but having already won two tournaments this year as a super rookie, she now returns to France for another shot at victory.

To prepare for the championship, which begins on Thursday, Park skipped the Indy Women In Tech Championship presented by Guggenheim last weekend.

“Since this is the last major tournament of the season,” she said, “I want to give it my all this weekend.”

At the Evian Championship last year, she finished at 17-under par, good enough to finish tied for second after Chun In-gee set the lowest major tournament score for men or women at 21-under par.

“Since I played well last year, I want to set higher expectations this year,” Park said. “Last year, In-gee played too well. My only goal is to play better than last year and win.”

The Evian Resort Golf Club is not her favorite course, as the fairways have severe slopes and there are a lot of obstacles on the course.

“I remember having a hard time playing the course last year and I’ll have difficulties again this year,” Park said. “There are a lot of barriers, but I won’t avoid it this time. Last year, I had bad results by trying to play safe.”

But that doesn’t mean difficult courses are a weak spot for Park, who won her first LPGA Tour trophy at the U.S. Women’s Open, where the course at Trump National Golf Club in Bedminster, New Jersey, was considered one of the most difficult this season.

“Aside from the U.S. Women’s Open course, the Evian Championship course is the hardest,” Park said after her victory in Bedminster. “I remember the weather condition wasn’t at its best during the weekend. So I will have to prepare for the weather conditions. Course management will be the biggest determining factor this weekend.”

Starting with Park’s victory at the U.S. Women’s Open in July, she finished sixth at the Marathon Classic presented by Owens Corning and O-I, 16th the RICOH Women’s British Open, and after two weeks off, she won the Canadian Pacific Women’s Open in August.

“In the beginning of the season, my short game wasn’t on point,” Park said. “But I’ve slowly gotten better with my course management and gotten my feel for the tournaments. So I had higher expectations in the second half of the season.”

After the final round of the Evian Championship, the winner of the 2017 Rolex Annika Major Award, given to the player with the best major championship record this season, will be announced. Since Park currently has 60 points, just 18 points behind Ryu So-yeon, she may be able to win the award if she finishes runner-up at Evian.

Also, the championship is the second biggest in women’s golf after the U.S. Women’s Open, with a winning purse of $547,500. If Park wins, she may also become the 2017 LPGA money leader and, depending on Ryu’s playing this weekend, could move up to first in the Women’s Rolex World Ranking.