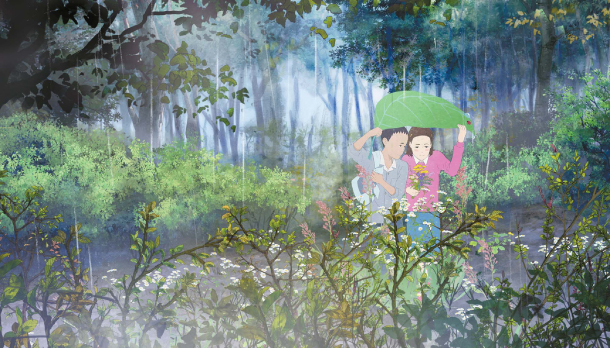 A country boy and a city girl make their way through the woods in a scene from “The Shower,” an animated film adapted from the short story with the same name written by Hwang Sun-won. [JOONGANG SUNDAY]

While it is not uncommon for novels to be the inspiration behind feature films, in Korea, books are rarely made into animated movies. But with the arrival of “The Shower,” an animated adaptation of a book called “Rain Shower” by the author Hwang Sun-won, film lovers are taking notice.

The newest work from director Ahn Jae-huun, who made a short animated movie based on three different Korean short stories in 2014, was released late last month. The film depicts a love story between a girl from the city and a country boy who happened to be together when a sudden rainstorm broke out. Even though many are already familiar with the story through the book, the director believes that delivering the same content through different means can bring out new emotions. Another film he is working on, “The Shaman Sorceress,” based on the novel “A Portrait of Shaman,” originally written by Kim Tong-ni, is set to be released in December.

“I thought it would be nice for someone to make a Korean novel that contains local spirit into an animated movie,” said Ahn. “Because I wanted to watch them.”

Although most of the work is done with computers, the director still uses a pencil to sketch at the beginning of the filmmaking process in order to maintain a nostalgic feeling in the final product. He believes that the joys and sorrows smeared in the hand-drawn images are part of the important cultural heritage he can hand down to the next generation. JoongAng Sunday, an affiliate of the Korea JoongAng Daily, met with Ahn to discuss why he wants to continue making Korean novels into animated movies.

Director Ahn Jae-huun, right, has worked on bringing characters from Korean literature to life through animated movies. Left, the two main characters from Ahn’s recent movie “The Shower” standing on either side of an animated image of novelist Hwang Sun-won. [JOONGANG SUNDAY]

Q. What are the ideas you had as you were producing the stories for the big screen?

A. The first step I took was rewriting the text of the book on my own. It was my attempt to become absorbed in the novel and get to know the characters. Drawing scenes from a novel that I really like with my own hands is such a precious experience. The purpose of making these movies is to deliver [what I felt] to the audience. Sometimes, ideas come to me and make me think of a certain element or add-on that may work better than the original story, but I have decided to do my best to focus on keeping to the original story. The ideas I have gotten while making these films will probably be used in my own stories in the future.

What was it like creating the scenes that show the emotions of the boy and the girl in the story?

Since the author wrote the story without detailed description, it was not easy to visualize. If I were to exaggerate any expression or gesture, the scenes could have been on the verge of being comical and the feeling of the original would get lost. In the end, I tried having the boy burst into tears when he learns that the girl has died, but after I inserted such intense emotion, it felt like the film was getting too far away from the original story. I had one friend who died when I was young, and I thought about that time. I remembered having a kind of blank feeling and thinking “What is this, am I not going to see my friend anymore?” So I just wanted to express that emotion [through the boy in the movie].

For the movie’s setting, did you use any particular town as a model?

In the original story, the setting is somewhere in Gyeonggi. I went to the literature center in Yangpyeong, Gyeonggi, for the novel, and I walked around the area to see and study every stone and blade of grass in great detail.

How about the things you added, such as the little props that are easily found in the countryside, like the scarecrow or the lookout hut in the middle of field?

In the original novel, there is no description of these things. I just added some scenes to liven up the background. I also tried to show certain seasonal flowers. After I saw purple balloon flowers when I was young, I was really impressed and thought that I needed to express that in my work, either through movies or paintings. I think I used the flowers properly in this movie.

Even in this film, you stuck to using hand-drawn sketches as your base images while everyone else goes for computer graphics right away. Why do you continue sketching on paper?

My hands are my favorite tool and they are the tool that I can use the best. I don’t just decide that I won’t do certain things ever again. I’m more interested in how to execute certain skills than how to innovate.

You have established Studio Meditation with a Pencil. How many employees work for your studio?

About 18. They paint some of the film’s crucial images and some are outsourced. About six colleagues in China also take care of some of the three-dimensional image production.

How much did you invest in making this movie?

It cost about 300 million won ($266,000), and there are many people who provided assistance - which I am very thankful for - including the broadcast network EBS. For the movie to be profitable, we need to have 150,000 people to buy tickets. It takes a long time to make profit off of animated films. Things don’t happen overnight, but we are going forward.

How hard was it to persuade the family of novelist Hwang Sun-won to do this?

Hwang’s son, poet Hwang Dong-gyu seems to have thought that a novel should be handed down and left as a novel. He kindly rejected the idea, so I called him often to explain [the work], and also showed him [some of the] work we had done in the past. After doing that for about a year, he told me “I think you can make it work.”

Why do you focus on making Korean short stories into movies?

Since animated content is becoming more commercialized, I have come to think that the chances of making such films will soon become slimmer, so I decided to do it while I can.

Korea’s animation industry still has a very long way to go to match the work made in the United States or Japan. Why do you continue doing this?

Compared to American or Japanese films, which come from a long history of [animation], we don’t have much to offer. But if we don’t do anything now, we still won’t have anything to offer in a decade. We take pride that we have contributed in growing the numbers of the audience for animated movies in Korea. We don’t get envious of others, we just do our work.