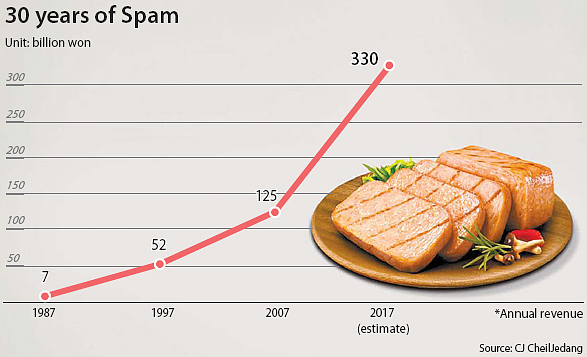 Spam, although an American product, is now a regular staple on Korea’s dining tables and sits proudly next to more traditional dishes like rice and kimchi. It is also one of the classic components in gift sets given to relatives and friends during the holidays.

CJ CheilJedang, a local manufacturer of Spam, announced that its flagship Spam turned 30 years old on Tuesday. The company first entered a partnership with the original Spam manufacturer, Hormel, in 1987.

During the past 30 years, Spam has sold an accumulated 1 billion cans, raising 3.5 trillion won in Korea. Not surprisingly, Korea is the second-largest Spam market after the U.S.

Koreans began to get in touch with Spam during the Korean War in the 1950s when the U.S. army brought in the savory canned meat product because of its long shelf life.

At the time, when nutritious food was scarce, Spam quickly gained popularity among Koreans, giving a boost to the canned meat industry in general, which was nearly nonexistent before.

Spotting its potential, CJ CheilJedang quickly partnered up with Hormel for technical cooperation and began local production in 1987. All CJ CheilJedang Spam is consumed in Korea.

Last year, Spam generated 305 billion won and is expected to make as much as 330 billion won this year.

Spam remains dominant despite innovations in the canned food industry. From January to July this year, sales of Spam accounted for 51.6 percent of the domestic canned meat industry, according to market watcher Link Aztec. The company said it will further foster the product to make it a 400 billion won brand by the year of 2020.

“Spam was first produced with technical cooperation with Hormel, but was able to maintain its popularity because of CJ CheilJedang’s strict quality control,” a spokesman said.