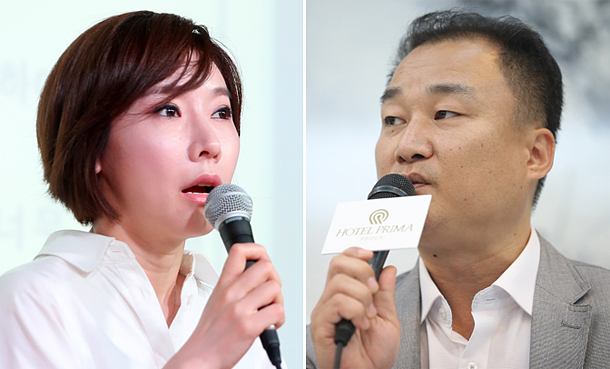 “Director Lee Soo-sung, could you really say that what you did was morally and ethically right?”

The words from actress Kwak Hyun-hwa were heavy with resentment and anger during a press meeting on Sept. 11 at a cafe in Mapo District, western Seoul, where she voiced her reaction to the court’s acquittal of the movie director Lee Soo-sung on Sept. 8. Kwak sued Lee for sexual abuse in April 2014.

Kwak was famous for many reasons, not just for her beauty but also for her wit and intelligence. Having debuted in 2004, she became a comedian in 2007, making appearances on numerous TV programs on KBS. In 2011, Kwak became the first celebrity to publish her own mathematics study book. “The Goddess of Mathematics” was written to help students overcome their fear of numbers. Simply put, she was more than your average pretty actress.

Then, in 2014, people began searching Kwak’s name on the internet not to buy her book or watch her comedy gigs, but to see pictures of her breasts, which were revealed during a movie called “House with a Good View,” released in 2012. Directed by Lee, the movie revolved around two characters, played by Kwak and Ha Na-kyung, who have opposite sexual desires. While Ha played a promiscuous real estate agent, Kwak’s character was a conservative colleague who refused to be stared at by men.

In February 2014, Kwak found out that Lee had made and distributed a reedited version of the movie in which Kwak’s breasts were fully exposed - a scene that was not included in the version of the film that was released in theaters. The actress quickly filed a lawsuit against the director.

“While we were shooting ‘House with a Good View,’ [the director] promised that he would distribute the breast exposure only with my consent,” said Kwak. “But he distributed the director’s cut without my consent, never mind telling me.”

Based on Kwak’s testimonies, she had clearly expressed her stance to the director that she would not film a nude scene, but was persuaded by Lee who said that “the scene is crucial to the movie,” and that he “would absolutely take out the scene if she saw the need in the editing process,” according to Kwak. The scene was taken out as Lee said, but only in the cinema versions. It took more than a year for the actress to find out that parts of her body had been exposed without her knowing.

However, the court ruled Lee not guilty on January 2017, stating that the terms of agreement were not clearly stated on the contract papers; that since the contract read that “[Kwak] has the right to refuse to participate in any scenes exposing the actress that were not agreed upon prior to the shooting… Lee would not have forced or distributed a nude scene that could have caused him legal controversy.” The court’s conclusion dismissed the verbal agreement between the actress and the director as “insufficient.”

The court ruled that, “the legal system deems it principal to go by what’s written down, except for special circumstances.”

Lee sued Kwak for libel afterwards, but Kwak was also found not guilty.

The press meeting came after the second ruling of the court acquitted Lee once more. During the hearing, the actress revealed a phone call with Lee that she has recorded when she called Lee after she found out he had sold the film with the unedited scenes to TV channels. Lee apologized, saying, “I’m sorry, I made the wrong decision… I’ll kneel down and apologize. I’m sorry. I’ll take the responsibilities. Why did I do something so stupid?”

Contrary to what seems like a sincere apology and regret to what he had done, Lee held a press conference in July this year before the ruling came out. “I wouldn’t have casted her if she had refused to shoot the nude scene. Even though I had been proven not guilty earlier this year, Kwak’s insults towards me, such as calling me a sexual criminal on social media, has caused me so much pain,” said Lee.

Meanwhile, as the court had already taken Lee’s side that the only valid claim is what’s written in the contract paper, Kwak’s case is unlikely to be turned over in the final ruling, should the prosecutors appeal one last time. Since actors do not have a strong voice in the shooting process compared to directors, who have the power to fire the actors according to their tastes, it’s not easy for an actor to demand a written document to state their requirements, such as not distributing their exposed scenes.

“Everyone in the film industry, including the director, the staff members and actors need to know about this,” said Kwak’s attorney, Lee Eun-ui. “Actors have no method of protecting themselves. This is time for some serious social discussions. This is not just a problem for Kwak Hyun-hwa as an individual.”