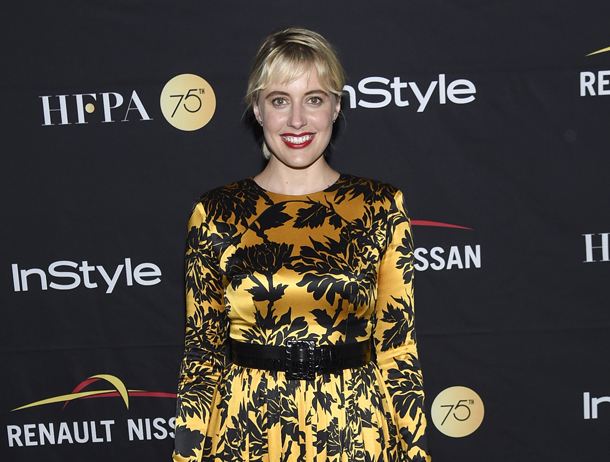 Greta Gerwig attends the InStyle/HFPA Party at the Toronto International Film Festival at the Windsor Arms Hotel on Saturday, in Toronto. Gerwig, already a successful actress, made her directorial debut with the movie “Lady Bird.” [AP/YONHAP]

TORONTO - Greta Gerwig stood on the stage of the Ryerson Theatre at the Toronto International Film Festival, wiping back tears from the roaring standing ovation that greeted her directorial debut, “Lady Bird.”

Gerwig was already a successful actress and a proven screenwriter, having co-written several films including two with Noah Baumbach (“Frances Ha” and “Mistress America”). But her leap into directing, she said, took some gumption.

“When I finished this [script], I thought, you know what, I’ve always wanted to direct. And I never felt ready. I never felt like I had enough experience, enough time, enough hours under my belt, enough time being around other directors on set,” said Gerwig at the premiere. “And then I thought: it’s time to jump, kid. You’ve got to do it. Even though it’s scary, you have to give yourself a chance.”

“Lady Bird,” an autobiographical coming-of-age tale written and directed by Gerwig and starring Saoirse Ronan, is one of the films that has indie distributor A24 poised to again be a major player through awards season. After its first best-picture nominee two years ago (the Brie Larson-led “Room”) and Barry Jenkins’ best-picture winning “Moonlight” last year, A24’s blistering streak may well continue.

Both of those films made landfall at Telluride and then made their biggest splash at the Toronto International Film Festival. The same has also been true of “Lady Bird,” which is backed by producer Scott Rudin. It’s been hailed for its witty, honest portrait of a high school senior (a show-stopping Ronan) trying to breaking free of her youth while discovering acting and feuding with her mother (an extraordinary Laurie Metcalf).

“I wanted to make a film about home and the way home is only vivid when you’re leaving. My home growing up was Sacramento so I felt like it was very underrepresented in the cinematic universe,” said Gerwig, chuckling. “I felt like nobody had made the Sacramento opus and it was time.”

While the Toronto International Film Festival is too sprawling for any one company to dominate, several recent festivals have often felt overwhelmed by Netflix or Amazon - the new deep-pocketed new heavyweights in film distribution.

A24 will also premiere the finished cut of James Franco’s anticipated comedy “The Disaster Artist” (it played as an unfinished film at SXSW earlier in the year) at a midnight screening in Toronto on Monday night. The rest of its Toronto roster includes Sean Baker’s acclaimed “The Florida Project,” a hit in May at Cannes; Yorgos Lathimos’ “The Killing of a Sacred Deer,” starring Nicole Kidman and Colin Farrell; Andrew Haigh’s latest “Lean on Pete” and the Kirsten Dunst-starring “Woodshock.”

The success of the slate stems directly from A24’s filmmaker-first attitude. Like it did with Jenkins, putting trust in the right talented young filmmakers is paying off.

“There’s numbers for everything now,” said Willem Dafoe, star of “The Florida Project.” “Movies can be bull---- but movies can also do a beautiful thing. They can change our minds about things. They can challenge how they think. In order to do that, they have to be made by original thinkers and they can’t be made by logarithms.”

A24 has by no means cornered the market on filmmaker-driven cinema. Sony Pictures Classics, Fox Searchlight, Focus Features and even major studios like Paramount Pictures, have all played major roles at this year’s fest. Other upstarts are also making noise, like Neon, which acquired the Tonya Harding tale “I, Tonya,” and Byron Allen’s Entertainment Studios, which grabbed the Ted Kennedy drama “Chappaquiddick.”