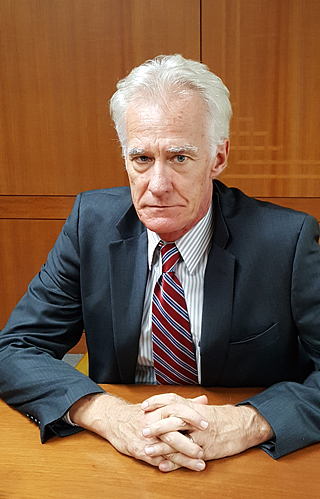 North Korea expert Stephan Haggard says Pyongyang is trying to “drive a wedge” between regional partners and the United States with its nuclear tests and maintains that additional sanctions are effective in raising the cost of the regime’s pursuit of weapons of mass destruction.

Haggard, director of the Korea-Pacific Program and distinguished professor of political science at the University of California, San Diego’s School of Global Policy and Strategy, sat for an interview with the Korea JoongAng Daily and JoongAng Ilbo Tuesday at the Ministry of Foreign Affairs in central Seoul.

“I still think that the [UN Security Council] resolution is a relatively strong resolution, and it would have been stronger if the first resolution hadn’t been circulated” and prompted comparisons, he said, brushing off criticism that the latest resolution adopted unanimously by the Security Council on North Korea Monday was watered-down since it didn’t include a complete oil embargo.

The United States floated a proposal initially that was “overly ambitious” and “completely unrealistic,” he pointed out. “So when we look at this resolution, it looks like it’s weaker.”

The Chinese have to be given “some leeway” he added.

There has been “a very steady evolution of Chinese thinking on sanctions,” Haggard said. “Until 2016, China was not willing to sanction commercial trade. Everything had to be related to the weapons of mass destruction program, and they’ve now basically moved into these sector-specific bans - coal, iron, textiles, seafood.”

Haggard said that the purpose of sanctions “is not just to punish North Korea, to bring them back to the table, but also to make the pursuit of its nuclear weapons program more costly, more expensive.

“No one thinks that the likelihood of success is high,” he said on sanctions forcing North Korea to return to negotiations for denuclearization. “It’s just trying to concoct a strategy which has at least somewhat higher probability of success.”

Haggard also warned, “It’s very clear that North Korea benefits from tensions both between the U.S., Japan and South Korea on the one hand and Russia and China on the other.”

He said, “That’s what these tests are in part designed to do, that’s their objective, to drive wedges” between the regional partners and also the United States and China.

“It’s important that the United States, South Korea and Japan coordinate with one another and be on the same page. But it’s also important that those three countries also coordinate very closely with Russia and China on this issue so that we minimize the daylight between those two sides, because that’s what North Korea is trying to do.”

He said that while he may be in a minority, he believes in the effectiveness of sanctions, citing the Iran experience, in which sanctions were effective in getting the country to negotiate a nuclear deal.

He added on the recent resolution, “These are limits on North Korea’s ability to earn foreign exchange, which are very substantial in terms of their total trade,” which can target between a third and a half of the country’s exports. North Koreans have reserves of oil and gas “because they are a wartime economy,” he said, “so they can draw those down.”

While the latest sanctions may not have an immediate effect, he continued, “I think the most important point is how all of this affects the markets. Because North Korea is really kind of a market economy.”

He added, “There’s the broader effect of what’s going to happen to businesses, employment, textile exports, exporters of seafood, workers in mines. All of those are things which Kim Jong-un can’t control. That’s the way sanctions operate.”

As a response, the North Korean leader “may very well choose to start firing off more missiles. But that’s not the time to rush to his assistance. That’s the time to wait, and to try to be patient. One of the things I’ve always said in all my talks and conversations is that South Korea and the United States have to stay cool and wait.”

He added, “I view the sanctions resolution in the context of a broader strategy that will involve ultimately a return to negotiations.”

He also dismissed the necessity of including Kim Jong-un on the UNSC blacklist, saying it did not add any new constrains on the regime. “Maybe it has some symbolic value,” but he said it would also “make it harder for him to say, ‘Okay, we need to think about reentering negotiations.’”

Haggard said U.S. President Donald Trump’s threats to cut off trade with countries that do any business with North Korea are “not feasible to do even with smaller countries.” But he added, “I think one of the reasons China is cooperating on this is because these secondary sanctions are looming.”

As to the next step should North Korea conduct a seventh nuclear test, Haggard said, “We’re getting extremely close to something that looks like a complete embargo,” a blocking of all trade with North Korea and interdicting ships, citing the Cuban missile crisis as an example. “We’re not there politically, but also, I think the strategy of taking a couple steps and waiting is not wrong, as along as the steps are large enough that it’s hard for the North Koreans to adjust to it.”

North Korea is running a large deficit with China, Haggard said, adding, “So North Korea is either drawing down its reserves, or it’s borrowing from China, or it’s getting some income from source that we are not seeing, but I don’t think that’s sustainable.” Should this situation continue, North Korea may face same kind of financial crisis, he pointed out.

Haggard also dismissed concerns of a military action or preventative war by North Korea. “You have to distinguish between saying all options are on the table and whether those options are good. Most people know that the options are not particularly good.”

“I supposed it’s not impossible that the United States can take unilateral action, but I think it’s highly, highly unlikely that they will take military action without consulting with South Korea,” he said.

Trump’s tweet calling President Moon Jae-in’s policy on North Korea one of “appeasement” was heavily criticized in the United States as being “inappropriate,” both by Democrats and Republicans, said Haggard. He said there was nothing in Moon’s policy toward the North, especially following his Berlin address, that indicates appeasement, adding, “If anything, his position, ever since has been elected, has moved more in a more forward direction.”

There are no “particularly clear or coherent” reasons for the redeployment of tactical nuclear weapon to South Korea, Haggard argued. “Such weapons would not be the weapon of first choice in a conventional conflict,” he said. “If for some reason we got into a conventional conflict with North Korea, it would be extremely difficult for South Korea and the United States to use tactical nuclear weapons.”

He also was concerned over the “optics” of such a deployment, adding, “That does not seem like a very wise thing to do diplomatically because it just undermines the argument that the objective of the negotiations is the denuclearization of the peninsula.”

Haggard kicked off a four-day trip to Seoul on Saturday and held a lecture at Yonsei University later on Tuesday.