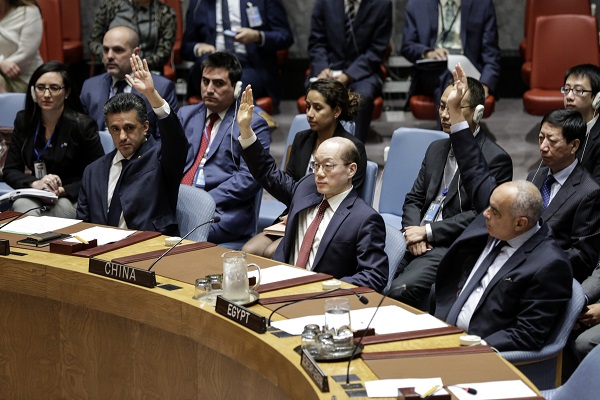 The UN Security Council in New York on Monday votes on a resolution which imposes fresh sanctions on North Korea following its sixth nuclear test on Sept. 3. [XINHUA/YONHAP]

The UN Security Council on Monday unanimously adopted new sanctions against North Korea following its sixth nuclear test imposing a cap on exports of crude oils to the country, though it fell short of a complete ban.

The 15-member council based in New York approved of a resolution which imposes a cap on crude oil exports to North Korea to the level of the past 12 months, some 4 million barrels, and limits exports of refined petroleum products to the country to 2 million barrels a year. It also bans condensates and natural gas liquids.

However, the latest resolution on the North fell short of a complete oil embargo, as called for in an earlier U.S.-written draft resolution, a move necessary to gain the support of veto-wielding members of the council, China and Russia.

The resolution, considered a watered-down version from the original U.S. draft, does not include North Korea leader Kim Jong-un or his sister in its blacklist and has softened the language on the hiring of North Korean overseas laborers. Russia and China host the largest number of North Korean laborers, considered sources of hard currency for the cash-strapped regime.

The draft circulated by the United States last week called to freeze the assets of and impose a travel ban on both the North Korean leader and his sister Kim Yo-jong, vice director of the Propaganda and Agitation Department of the Workers’ Party.

The latest resolution reduces around 30 percent of oil provided to North Korea, according to the U.S. mission to the United Nations in a statement, and cuts off over 55 percent of refined petroleum products going to the country.

China is the largest supplier of crude oil to the North.

The South Korean Ministry in a statement lauded the adoption of UNSC Resolution 2375 as a response to the Pyongyang’s latest nuclear test, which it said “showed the strong will of the international community that it will not allow North Korea’s reckless and irresponsible nuclear weapons development, a serious provocation to international peace and security.”