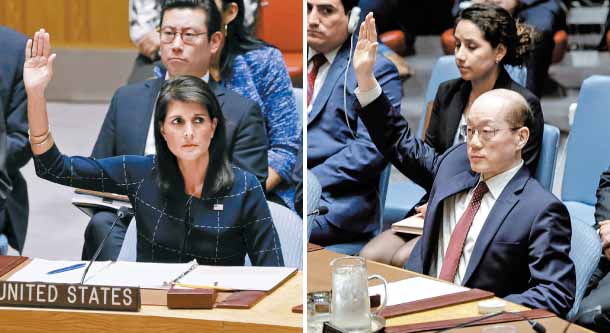 The UN Security Council on Monday unanimously adopted new sanctions against North Korea following its sixth nuclear test, imposing a cap on exports of crude oil to the country, though it fell short of a complete ban.

The 15-member council based in New York approved Resolution 2375, which imposes a cap on the supply, sales or transfer of crude oil to North Korea to the level of the past 12 months, some 4 million barrels, and limits exports of refined petroleum products to the country to 2 million barrels a year. It also bans the sale of condensates and natural gas liquids to the North.

However, the latest resolution fell short of the complete oil embargo called for in an earlier U.S.-drafted resolution, which would have needed the support of veto-wielding members China and Russia.

The resolution, though considered a watered-down version of the U.S. draft, will reduce oil provided to North Korea by around 30 percent, according to the U.S. mission to the United Nations, and cut off over 55 percent of refined petroleum products going to the country. China is the largest supplier of crude oil to the North.

It also includes a ban on North Korean textile exports, which was the country’s second largest export category in 2016 after coal and other minerals, and is expected to reduce its revenues by up to $800 million.

The latest resolution does not include North Korean leader Kim Jong-un or his sister on its blacklist, as initially proposed.

The draft circulated by the United States last week called for a freeze on the assets of both the North Korean leader and his sister Kim Yo-jong, vice director of the Propaganda and Agitation Department of the Workers’ Party. It also called for a travel ban on the two siblings.

One North Korean individual blacklisted, Pak Yong-sik, a member of the Central Military Commission, who was described as being responsible for the development and implementation of the North’s Workers’ Party military policies and directing the country’s military defense industries. The council also froze the assets of three additional entities: the Central Military Commission, the powerful Organization and Guidance Department that directs key personnel appointments and the Propaganda and Agitation Department, which oversees the North’s media and its censorship.

The draft had also called for a ban on North Korean overseas laborers, but the approved resolution included some caveats. The resolution prohibits countries from providing work authorizations to additional North Korean nationals, leaving room for a “case-by-case” review in the case of humanitarian assistance, and does not apply to work authorizations for which written contracts have been finalized previously.

Russia and China host the largest number of North Korean laborers, which are sources of hard currency for the cash-strapped regime.

It also bans joint ventures with North Korean entities, except for non-commercial public utility infrastructure projects not generating profits, and calls for the inspection of vessels on the high seas, if there are reasonable grounds to believe the cargo of such vessels is prohibited items.

“This will cut deep,” U.S. Ambassador to the UN Nikki Haley said on the new resolution, pointing out it will hit Pyongyang’s ability to fuel and fund its nuclear and missile programs and will reduce by almost 50 percent its supply of gas, diesel and heavy fuel oil.

She added it also completely banned natural gas and other products that could be used as a substitute for those fuels.

When combined with recent sanctions on coal and other products, a full 90 percent of Pyongyang’s exports were now fully banned, she said.

“This ban will eventually starve the regime of an additional $500 million or more in annual revenues.”

She also said it will put an end to the currency earned by some 93,000 North Korean citizens it sends overseas to work.

Meanwhile, Chinese Ambassador to the UN Liu Jieyi said Beijing hopes the United States would not seek regime change for North Korea or measures that would ensure the regime’s collapse.

He also called for the removal of the American Terminal High Altitude Area Defense (Thaad) antimissile battery from South Korea, even though the focus of the meeting was to vote on the resolution.

Russian Ambassador to the UN Vassily Nebenzia said that Monday’s resolution could be described as a “prologue” to a political settlement of the North Korea issue. “We would like to see proof of that in the near future,” he added.

South Korea’s Blue House said in a statement said it “highly regarded that the UN Security Council unanimously adopted Resolution 2375 within a short period of time.”

Park Soo-hyun, the presidential spokesman added, “North Korea should stop testing the stern resolve of the international community, for the only way to escape from diplomatic isolation and economic pressure is to return to the negotiating table for a complete, verifiable and irreversible denuclearization.”

The South Korean Foreign Ministry in a statement also lauded the adoption of UNSC Resolution 2375 as a response to the Pyongyang’s latest nuclear test, which it said “showed the strong will of the international community that it will not allow North Korea’s reckless and irresponsible nuclear weapons development, a serious provocation to international peace and security.”

Geng Shuang, spokesman of China’s Foreign Ministry, said in a statement that the latest resolution “reflected the common position of its members to safeguard the peace and stability of the Korean Peninsula and the region, promote the denuclearization of the Peninsula and uphold the international non-proliferation regime.”

Geng said that China “hopes that the contents of Resolution 2375 can be implemented in a comprehensive and complete manner.”

However, he said that the United States, South Korea and other parties “should also avoid taking the actions that will further complicate the situation,” urging a peaceful solution to the issue.