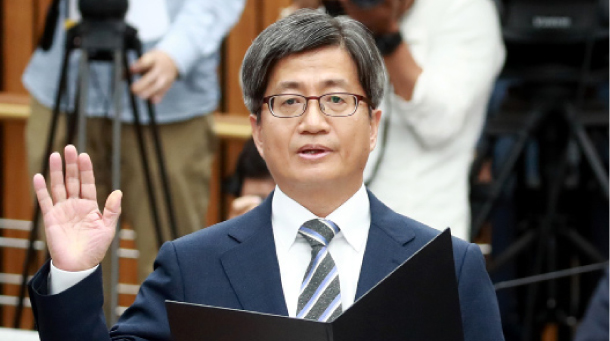 Kim Meong-su, chief justice nominee of the Supreme Court, stands for a confirmation hearing in the National Assembly on Tuesday. [YONHAP]

President Moon Jae-in’s nominee to head the Supreme Court responded on Tuesday to attacks by conservative lawmakers regarding his liberal beliefs at a National Assembly hearing to confirm his appointment.

Judge Kim Meong-su, head of the Chuncheon District Court in Gangwon Province, who was nominated on Aug. 21, said during the hearing that he will fight the judicial community’s long tradition of providing special treatment to retired judges when they open private practices.

“I will not dismiss the argument that such practices triggered public distrust in the judiciary,” he said. “I will try to find the reason and provide resolutions.”

Kim dismissed conservative parties’ skepticism over his having served as inaugural president of the Society for Research on International Human Rights Law, a successor of the Society for Research on Our Law, which faced strong criticism during the conservative administration of Lee Myung-bak after its members made a series of alleged “left-leaning” verdicts.

“During my 31 years on the bench, I concentrated all my heart to run trials as a judge,” Kim said. “I think it is meaningless and inappropriate to divide judges along liberal and conservative lines. I never had ideological or political biases.”

While Kim said he is fit to serve, the conservative opposition parties said Moon chose him to empower liberal judges. They also pointed out his lack of experience as a Supreme Court justice.

The lawmaker said Kim does not have nearly enough experience to become Yang’s successor. “It’s like a Chuncheon police chief heading the National Police Agency.”

Kim burst into laughter when Chang compared his resume to that of Yang’s. “I understand the concern,” he said, “but I believe I can prove my abilities when the opportunity comes.”

The hearing was another contest between the conservative opposition lawmakers and liberal ruling party, as it took place just one day after the National Assembly voted down Moon’s nominee to head the Constitutional Court.

The ruling party failed to secure the necessary few votes to pass the motion to confirm Justice Kim Yi-su to head the court, while the conservatives were united to vote him down. It remains to be seen whether the ruling party will secure enough votes to confirm Kim Meong-su’s nomination.

The DP only has 120 seats in the 299-member legislature and forming an alliance with the People’s Party, which has 40 lawmakers, is essential.

The People’s Party said it will allow its lawmakers to freely decide the fate of the Supreme Court chief justice nominee, just as it did on Monday for Kim Yi-su’s confirmation.

“We never tried to show off our power,” said Rep. Lee Yong-ho, chief policymaker of the party, referring to its lawmakers’ rejection of Kim Yi-su. “We didn’t have any strategic intention. Each lawmaker made their own judgment.”

He added, “And we will do the same for Kim Meong-su. The People’s Party is not a sidekick [of the ruling party]. We are a political party that serves the people.”

Throughout the Moon administration, the People’s Party’s cooperation has proven to be crucial to pass important bills. The nomination of Prime Minister Lee Nak-yon and Moon’s supplementary budget bill, for instance, were passed because of the party’s cooperation.

The prospect of a coalition between the DP and the People’s Party appeared gloomy, however, as they are engaged in a war of words.

At a National Assembly event, DP Chairwoman Choo Mi-ae publicly condemned the opposition parties for having voted down Kim Yi-su. Senior members of the LKP and People’s Party also attended the event, and Choo did not hesitate to call them “shameless.”

Choo also left the room, refusing to talk to Rep. Park Jie-won of the People’s Party when he approached her.

Park said the ruling party leader’s retaliation will not bring about cooperation. “Moon is a weak president who does not have the majority in the legislature,” Park said.