Seoripul to add a dash of color to Bangbae-dong streets

Seoripul to add a dash of color to Bangbae-dong streets 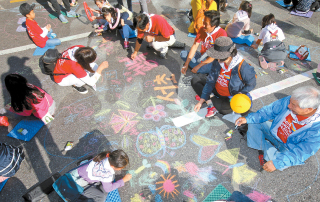 Seoripul Festival is coming to Seoul this Saturday to fill the streets with music and arts for nine days, Seocho District Office said on Monday.

“The Seoripul Festival will be a festival of culture that will liven up the streets of Seocho District, southern Seoul,” said Cho Eun-hee, Seocho’s mayor. “It will be a festival that doesn’t fall short of the fun at the world’s greatest festivals, like the Edinburgh Festival Fringe or Nice Carnival.”

The festival, which was inspired by the Edinburgh Festival Fringe, dates back to 2015. “The mayor wanted to create a festival in Seoul that is acknowledged globally like the Fringe,” said Kim In-ha, an official organizing the event at Seocho District Office. “We will have a lot of buskers on the streets and improvised music here and there, just like the Fringe.”

Many activities will be held in a neighborhood in Bangbae-dong known as the Bangbae Cafe Street for its concentration of cafes.

“The highlight of the festival will be the parade on Sept. 24, which will start from 4 p.m., at the main road of the cafe street blocked off from traffic, and it will involve some 400 participants, stretching out the parade to as long as 330 meters [1,082 feet],” the district office said in its press release. “For an hour or so, the parade can be joined by everyone, and there will be a DJ and loud Latin and Samba dance music that will turn the whole street into a dance floor.”

Earlier in the day at the same spot, the festival will host buskers and invite participants to sit on the asphalt and decorate a 7,000 square-meter (1.7 acre) area with chalk art.

From Saturday to Sept. 24, the festival will host buskers and a number of concerts and singing contests, including the KBS Korea Sings contest at an outdoor stage near the Seocho District Office on Saturday, a folk concert on the floating stage on Yangjae Stream on Monday, Seochogol Gala Concert, a classical music concert at Seoul Arts Center’s Sinsegae Square on Sept. 20 and the Korea-France Music Festival at the Seoul Floating Island of Banpo Han River Park on Sept. 23, which will be joined by French singer songwriter Vianney and Korean musicians and groups Daybreak, Park Mi-kyung, Jatanpung, Cheetah, Enoch and Alphabet.

“All concerts and festival activities are free,” Kim said.

For more information on the festival, visit seoripul.org.