Rookie kicker from Korea hits a snag in NFL debut

Rookie kicker from Korea hits a snag in NFL debut 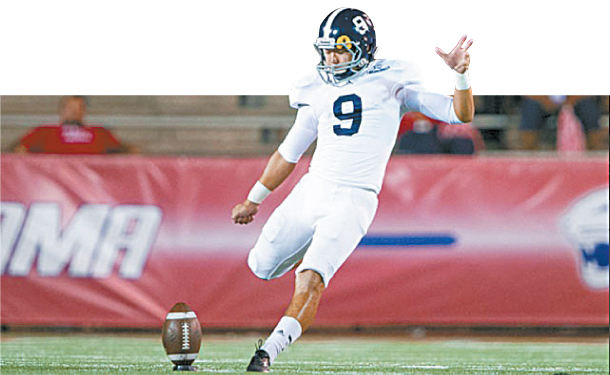 Koo Young-hoe of the LA Chargers kicks a football during the team’s game against the Denver Broncos at Sports Authority Field in Colorado on Monday. [SCREEN CAPTURE FROM LOS ANGELES CHARGERS WEBSITE]

Koo Young-hoe, the first NFL kicker with Korean nationality, appeared in his debut game with the Los Angeles Chargers on Monday, helping his team score three points against the Denver Broncos at Sports Authority Field at Mile High Stadium, though the Chargers ended up losing 24-21. 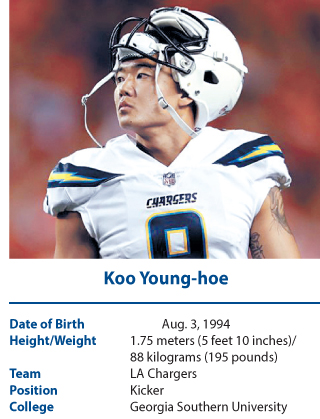 Koo started the game for the Chargers and was the team’s only kicker. When the team was down 7-0 with less than five minutes remaining in the second quarter, Koo was called into the game to score an extra point after a touchdown scored by running back Melvin Gordon. Koo completed the kick and scored two more extra points during the fourth quarter, helping the Chargers get as close as 24-21 against the Broncos.

With five seconds remaining in the game, the Chargers once again put Koo in the game for a field goal attempt at the 44-yard line in hopes of a tie. Koo’s kick was successful, but it didn’t count, as Vance Joseph, head coach of the Broncos, called a timeout right before.

After the timeout, Koo attempted the field goal once more but was blocked by defensive end Shelby Harris.

“Of course [I want it],” Koo told NFL.com. “As a kicker, you dream about those moments. But at the same time, you have to come through.”

The 23-year-old Georgia Southern University graduate joined the Chargers as an undrafted free agent in May after leaving an impression during the Chargers’ preseason. Koo moved to the United States from Korea at age 12 when he barely knew any English. He lived with his mother while his father continued to work in Korea as a professor at Induk University.

“Football isn’t a popular sport in Korea,” Koo’s father said. “I’m thankful for people showing interest in my son’s debut game. I’m proud of him for making his NFL debut.”

Koo said he started football upon his father’s recommendation.

“I wanted him to be good at one thing in the United States,” Koo Hyun-seo, his father, said. “And that was football. When he first started, coaches noted how Young-hoe was talented at kicking. At the time, he wanted to play soccer, but I convinced him to play football.”

“Young-hoe’s coaches at Georgia Southern always said he had the ability to play in the NFL, but he didn’t get drafted,” his father said. “But after the rookie draft, the Chargers contacted Young-hoe first, and Young-hoe seemed confident enough to be in the Chargers’ lineup.”

Koo is the fifth Korean-born player in the NFL after John Lee, Lloyd Lee, Kyle Love and Hines Ward. He also follows Edward Chung, a Korean American football player who is now assistant coach for the Philadelphia Eagles’ offensive line.