The U-18 Korean baseball team returned to Korea from Thunder Bay, Canada, after finishing in second place in the World Cup. As the team touched down in Incheon on Tuesday, the KT Wiz prepared to welcome its newest star player. 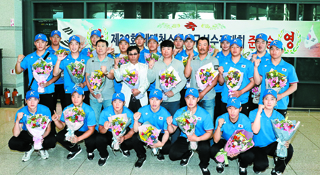 The U-18 Korean national baseball team pose for a picture after arriving at Incheon International Airport on Tuesday. [YONHAP]

Though the U-18 Korean baseball team finished runner-up at the WBSC U-18 Baseball World Cup after losing to the United States in the final, they are now ranked second in the world, as they defeated all other high-ranking teams during the championship.

Two players on the national team - Kang Baek-ho and An Chang-seok - were the first picks of the KBO Rookie Draft on Monday. Kang will be wearing the Wiz’s uniform while An will join the Samsung Lions.

Kang is already receiving a lot of attention from other KBO players due to his ability to both pitch and bat. Kang led Korea to the runner-up spot at the World Cup.

With all the attention on their super rookie, the Wiz are getting excited for the upcoming season. To welcome Kang back to Korea, Lim Jong-taek, head of KT Sports, was at Incheon International Airport with the Wiz’s uniform.

“I do feel a little bit of a burden having to live up to expectations after receiving this much attention even before joining the Wiz,” Kang said. “As of now, my goal is to play in the KBO. I want to show the fans that the 20 year-old rookie can play in the KBO.”

But for Kang, greater opportunities await him in his professional career. Right after the Wiz drafted Kang, they announced that he will be assigned as both a batter and a pitcher. At Seoul High School Kang played in the starting lineup for all three years and has shown outstanding ability in both positions. He concluded this season with a 0.422 batting average, and as a pitcher he picked up three wins and one loss in 29 innings with a 2.43 ERA.

“It is the club and the manager that assigns my position,” Kang said. “I think it will be possible for me to play as a pitcher while being an outfielder. I’ll try my best in whichever position the Wiz assigns me to.”

Aside from Kang and An, Bae Ji-hwan also received significant attention upon arrival. Though the 18 year-old shortstop didn’t get drafted by any teams at the KBO rookie draft on Monday, he received by far the most attention as he announced that he will be heading to the United States to start his professional career.

Bae was another outstanding high school prospect that was highly likely to be in the top five draft, after Kang and An. But he chose to take a less common approach, following in the path of Park Chan-ho and Choo Shin-soo who headed straight to the United States without spending any time in the KBO.

Teams in the United States have shown interest in signing Bae. The Atlanta Journal Constitution reported on Monday that the Atlanta Braves are in the process of finalizing a contract with Bae. From his speed and contact in batting, the Braves were one of the first teams to show interest in Bae after he graduated high school. Once the Braves finalize the contract he is expected to receive a signing bonus of about $300,000.

“From playing against players from different countries throughout the World Championship, my thoughts of playing in the United States grew stronger. Since I chose the hard way, I’ll become a stronger player and survive until I get to the big leagues. My goal is to play in the major league within the next three to four years.”