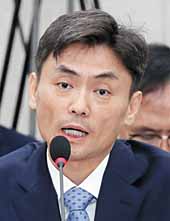 President Moon Jae-in’s nominee to lead his new Ministry of SMEs and Startups is at risk of losing support from lawmakers after they raised questions about his religious background and lack of experience in government administration during a hearing on Wednesday.

The National Assembly committee deliberating on the nomination said in a report that Park Seong-jin, a mechanical engineering professor at Pohang University of Science and Technology tapped to lead the ministry, lacked the qualifications and skills necessary for the job.

It is the first time that a president’s party has refused to accept a cabinet nominee since public hearings for appointees were first implemented under the Kim Dae-jung administration in June 2000.

The Blue House has not made a decision on whether to accept the National Assembly committee’s decision, though public pressure for Park to withdraw has been increasing.

The report questioned his politics and views on history.

In his seminars, Park has invited members of a controversial neoconservative group called the New Right to speak, and the professor himself has previously argued that dictatorship under President Syngman Rhee was necessary to establish a free democratic system.

Such views are considered to be in direct conflict with Moon’s liberal government.

The report also raised issue with Park’s creationist background, though he later told reporters that while he was a strong believer in Christianity, he was also a supporter of evolution.

Above all else, the report questioned his past ethical lapses, such as reporting a lower value for apartments he purchased in order to dodge taxes and accepting free stocks from a start-up that his students ran to curry local government support.

“We express our concerns on his expertise and administrative experience as well as sense in state affairs in managing diverse interest groups from conglomerates and SMEs to different government departments in pursuing SME policies as the first minister of SMEs and start-ups,” the report said.

The committee’s decision to disqualify Park was made in the absence of lawmakers from the ruling Democratic Party, who walked out of the meeting but didn’t oppose the decision.

Although they have not publicly condemned Park’s nomination as the opposition parties have, there is growing consensus within the party that Park should bow out.

“The Democratic Party also shares the view that Park is unfit,” Chang Byung-wan, the committee chairman from the opposition People’s Party told reporters.

“But the Democratic Party’s position is that it would be best for [all] for Park to resign [to save the face] of the Blue House that nominated Park.”