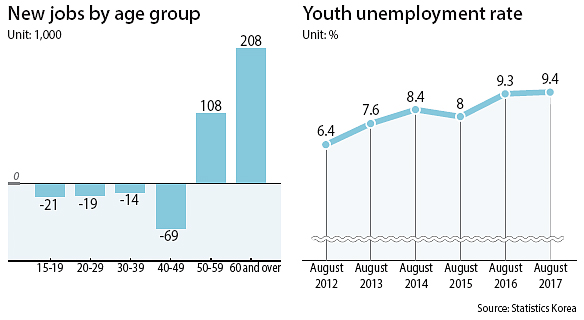 The number of new jobs in August fell to the lowest level in four and a half year partly due to weather.

According to Statistics Korea on Wednesday, only 212,000 new jobs were created last month to make a total of 26.7 million jobs.

From February through July, more than 300,000 jobs were added every month.

The government said a primary reason for last month’s drop was weather.

“Last month it rained for six consecutive days on the week that celebrated Korea’s independence and as a result, job opportunities in construction weakened,” said Bin Hyun-joon, who works in the statistics agency’s employment statistics office.

The number of people employed on a daily basis, which is common on construction sites, shrunk 36,000 in August to a reach a total of 1.4 million, which was a 2.5 percent decline compared to a year earlier.

The number of unemployed rose 5,000 to exceed 1 million. The unemployment rate remained unchanged at 3.6 percent.

The study also showed that the number of workers that don’t receive regular wages declined for the first time since July 2016.

This category includes many people who started their own businesses after retiring from a salaried job. Last month the number of such workers shrunk 3,000, which the government sees as a positive sign.

The increasing number of self-employed people has been a major concern as many ultimately end up in poverty after pouring in their life savings and severance pay to start a chicken franchise or a convenience store. Competition in those businesses has become fierce as more Korean baby-boomers retire.