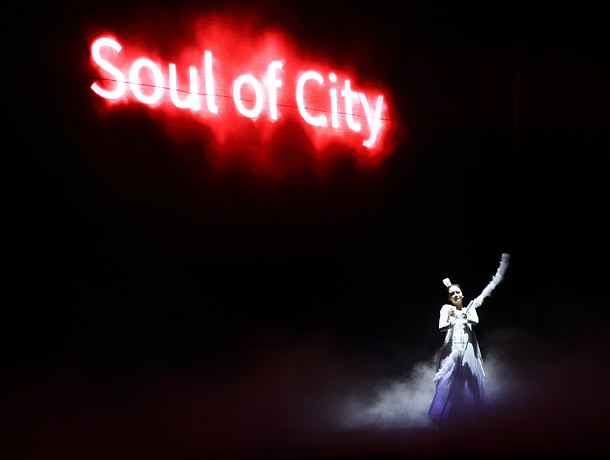 The opening ceremony of this year’s UIA 2017 that ended its eight-day run on Sunday at COEX, southern Seoul, under the theme “Soul of City.” [UIA 2017 Congress SEOUL ORGANIZING COMMITTEE]

In recent years, Seoul has been slowly introducing architectural projects that attempt to breathe life into new public spaces in the city. Since this metropolitan city with 600 years of rich history has rapidly developed into one of the most energized concrete jungles in the world, Seoul Mayor Park Won-soon has stressed that it’s time to “shift the focus to history, culture, nature and most importantly, the people so that Seoul can turn into a more people-oriented city.”

Although there have been some controversies along the way, Park managed to open Seoullo 7017, an overpass that has been converted into a pedestrian walkway, in May.

Additionally, the Mapo Oil Reserve Base, which was built in the 1970s has newly open on Sept. 1 as a “Culture Reserve Base, a hub for culture, history, nature and leisure,” he explained.

This emphasis on public architecture projects has been on display for the world renowned architects who gathered in Seoul for the prestigious UIA 2017 (International Union of Architects), which ended its eight-day event on Sunday.

Known as the Olympics for architects, this triennial event brings together thousands in the field of architecture from around the world to exchange ideas and share their visions of the future of the industry.

During the event, French architect Dominique Perrault, familiar to Koreans as the architect behind the underground complex known as ECC at Ewha Womans University, and the Pritzker Prize-winning architect Toyo Ito, especially stressed their belief that the “Soul of City,” the theme of this year’s event, lies in the public.

Looking underground for the roots of public space

Since Dominique Perrault, best known for the expansion of the National Library of France as well as the extension to the Pavillon Dufour at the Palace of Versailles, has worked on a number of projects that involve the architecture of underground spaces, it may seem like the French architect is turning to underground spaces because the world above ground is already saturated.

That is not entirely wrong, but shows a lack of understanding of the concept of “groundscape” that he has been exploring and experimenting with for many years.

For Perrault, using underground space doesn’t necessarily mean digging deep. It’s “carving out the minimum layer of the earth, the epidermis,” the architect explains. “My idea is not to dig deep, but just a minimum layer to create roots underneath for the buildings above ground.”

The best example of his “groundscape” concept is the underground Ewha Campus Complex (ECC) at Ewha Womans University, which celebrates its 10th anniversary next year. Although many expected the architect to construct a monumental building that stands tall above ground, Perrault chose to go underground - the reason for which is, “the people,” Perrault insists.

By designing a long walkway that connects the main gate of the university to the underground building, Perrault says he wanted the “city to stretch into the campus.”

“I wanted to unite the city and the campus and interweave them without boundaries. When I visited the campus during the weekend, I saw so many residents living nearby coming here to enjoy it like a public space and that is exactly what I wanted to do when I launched this project,” Perrault explained.

“I heard that months ago, this area was occupied by hundreds of students and citizens to demonstrate against the former president. I think it has become such an emblematic public space for the country’s political change as well.” 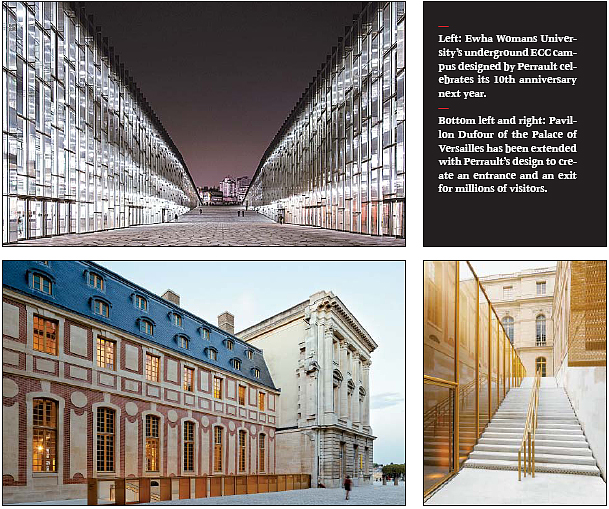 Perrault also explained that underground construction, according to his “groundscape,” is also sustainable as “it keeps things cool in the summer and warm in the winter.” According to the architect, the energy costs of the ECC are 60 percent lower than conventional buildings of the same size.

The architect also launched a project of designing an underground network in central Seoul together with 60 university students from Swiss Institute of Technology (EPFL) and Ewha Womans University, as part of the 2017 Seoul Biennale of Architecture and Urbanism.

“I was mesmerized by the long street of underground stores located in Euljiro in central Seoul and thought the answer to revive this is by bringing natural light into it - by connecting the underground with the outside by installing a long slope for example,” Perrault explained.

Titled “Groundscape eXPerience Pavilion,” the 30-meter-long steel grid structure model of this underground architecture is currently being exhibited at the Dongdaemun Design Plaza in central Seoul.

“I’m not against building huge skyscrapers,” he added. “I have no problem. I actually have built a lot of them. But my interest and my commitment now is to connect those skyscrapers above ground with the ground floor and break away the boundaries and allow people to have more open spaces and freer access.”

Award-winning Japanese architect Toyo Ito, 76, says the image he has of Tokyo in the near future is “a city covered by homogenous grid.”

“The living spaces of people living in Tokyo will be cramped and will be indistinguishable from one another. As more and more people chose to live in high-rise apartment buildings, they become more and more separated from nature, making them unhappy as a result,” said Ito during the UIA Gold Medalist Lecture on Sept. 7 at COEX, southern Seoul.

Ito, who has already achieved an array of acclaimed awards like the Pritzker Architecture Prize in 2013, the Golden Lion at the Venice Biennale in 2012, and the Royal Gold Medal from The Royal Institute of British Architects in 2008, added the UIA’s Gold Medal this year to his sparkling list.

In 2011, when a huge earthquake followed by a tsunami devastated northeastern Japan, Ito says he asked himself what he could do as an architect.

“I saw shelters that were installed for those who lost their homes by the tsunami, who were mostly old men and women,” he said. “Most of them had been working in farms or working as fishermen, living completely different lifestyles to the modern people in the city.”

But to Ito’s surprise, the temporary housing for them was so small “like container boxes,” which was difficult for farmers and fishermen, who used to enjoy more space close to nature to adapt.

“It was designed with a modernism philosophy, to provide privacy for each family, but it only left them feeling isolated and lonely,” Ito explained, adding that it was a design that failed to really sympathize with the lifestyles of the victims.

That is why the architect came up with the “Home-for-All” project, which he describes as “an attempt to provide places - public spaces - where victims who lost their homes can meet and enjoy time together.”

“It is still very small, but it is open to nature, similar to the farm houses that they are familiar with,” he said. “They were so pleased to have a Home-for-All that they cried tears of joy.”

Japan gets hit by earthquakes and tsunamis often enough that reconstruction is indispensable. But Ito says much of the reconstructions today “are based on modernist ideology and every area has almost the same form.”

“They cut mountains for new housing and construct high sea walls on the seaside, which clearly divides people and nature,” said Ito. 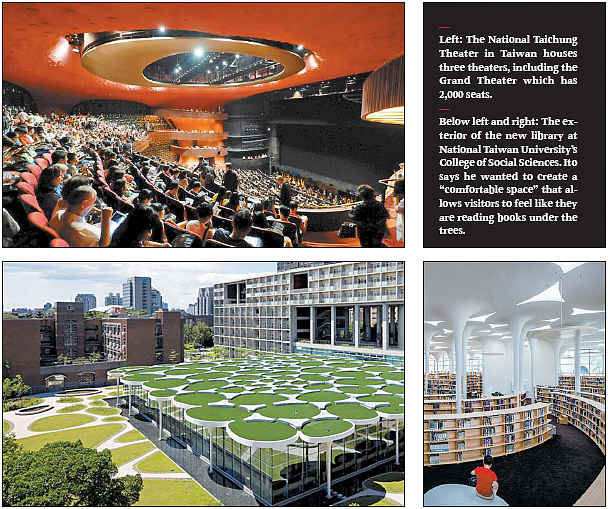 “Modernist ideology believes that people can dominate nature through technology. But people living in tsunami struck areas believe they can never overcome nature. They fear nature, they respect nature and they give thanks for the blessings of nature,” he added, criticizing the high-rise apartments and office buildings being erected rapidly in Tokyo which “makes everything homogenous, away from nature.”

That is why when Ito is entrusted with a project, he hand-draws how he can bring people close to nature using crayons.

For the new library for the College of Social Science of the National Taiwan University, Ito says he imagined a comfortable space and drew two people reading in the breeze, while sitting underneath a large tree with green leaves.

Ito realized this by creating a building with a pattern that looks like the leaves of a lotus. Bookshelves are positioned in swirls - a pattern the architect is also attracted to - to allow easy access.

The National Taichung Theater in Taiwan, completed last year, is also Ito’s design, and took 11 years to realize. According to Ito, his focus was not only to create an opera house with great acoustics and comfortable auditoriums for its three halls, but a public space where people, even those that do not have tickets to the shows, can come and just wander around.

“I heard more people come to just wander around and enjoy the atmosphere than to see the opera,” he said, chuckling.