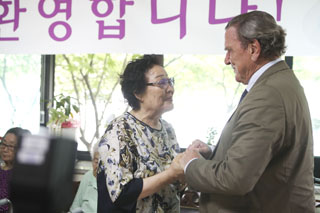 The distance from Saxony, Germany, where former German Chancellor Gerhard Schröder lives, to the House of Sharing in Gwangju, Gyeonggi Province, where victims of Japan’s wartime sexual slavery live is 8,279 kilometers (5,144 miles). This is not a small distance. It was the pilgrimage of solace for the women victimized by war crimes.

Schröder visited the House of Sharing on September 11, the fourth day of his visit. He is the first former or incumbent foreign head of state to visit the house. He brought a portrait of Anne Frank, the young Jewish victim of the Holocaust. The suffering and sacrifices of the comfort women victims taken by imperial Japan as young girls was just as painful and traumatic as Anne Frank’s experience.

Schröder did not hesitate to embrace and hold hands with the victims. He said they are the ones “realizing human rights” and the history they are writing is the future, not the past. It was a pledge never to repeat such terrible sacrifice. He also made remarks on Japan’s unapologetic attitude toward the past. He said that the comfort women victims should be candidates for the Nobel Peace Prize.

On the guest book, he wrote, “Tears are running when I think about those who endured such tremendous pain.” Lee Yong-su, one of the victims, wept as accompanying interpreter Kim So-yeon explained what the former German chancellor had written. Later that day, Schröder watched “A Taxi Driver,” a movie about the May 18 Gwangju democratization movement, with Korean viewers in a theater in Seoul and cried. These scenes vividly show the historical awareness of the political leaders of Germany, who have apologized for the country’s wartime past to other European nations whenever opportunities arises. On September 12, the former German chancellor’s name was ranked high in the search list on major portal sites.

The distance from the Japanese capital of Tokyo to the House of Sharing is 1,133 kilometers. It is only one seventh of how far Schröder travelled, but Japanese Prime Minister Shinzo Abe has never visited the victims. Instead, he denies the forcible nature of wartime sexual slavery and repeatedly says that the Korea-Japan agreement should be implemented.