Retailers get creative with Chuseok gifts

Retailers get creative with Chuseok gifts

A year after Korea passed a broad antigraft law limiting the value of gifts that people can give to public officials, retailers are maintaining a two-pronged strategy for Chuseok gifts, targeting both the high end and low end with premium and frugal gift sets for the annual harvest festival.

Some retailers are also devising more creative gift sets that cater to a younger generation, throwing in hip products like imported beer and camping equipment.

Chuseok is considered Korea’s biggest holiday, and people traditionally spend exorbitant amounts of money for gift sets that contain everything from fresh fruit to grass-fed beef. It was expected that the so-called Kim Young-ran Law, which went into effect in late September last year, would hamper sales of pricey sets. The law limits the price of gifts that can be given to public officials to 50,000 won ($44.34). The law defines “public officials” broadly, and includes civil servants, lawmakers, teachers, journalists and even their spouses. 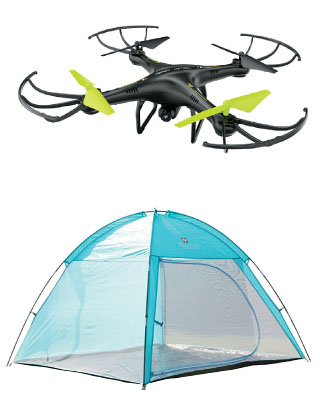 Emart, the country’s largest retailer, opened sales of Chuseok gift sets on Aug. 14, and up till Sept. 7, revenue from products above 100,000 won jumped 251.5 percent compared to the comparable period last year. This was even higher than the entire annual growth rate for gift set purchases at 224.2 percent.

Last year, figures had dropped by 11.6 percent compared to the previous year, implying that consumers were more careful not to surpass the 50,000 won limit for gifts.

Traditional products given over Chuseok to express gratitude and respect include hanwoo (premium Korean beef), dried corvina and fresh fruit. Emart attributed the increase in sales of higher-priced products to a longer Chuseok vacation this year as more people are purchasing gifts for families rather than public officials.

“We expect that demand will soar as more people travel and send big gifts home instead,” the company said, “while there will also be people who visit their distant relatives longer, another occasion for big gifts.”

Another possible explanation is that the decline in this price sector last year was extremely low, prompting a boost in growth figures.

Its beef set contains free-range meat raised on Jeju Island and is priced between 270,000 and 1,200,000 won. Cows grown there are fed eco-friendly feed on a farm where the entrance of outsiders is strictly forbidden.

As expected, the popularity of gift sets priced at 50,000 won and under continued this year. Apart from the effects of the Kim Young-ran Law, more single and dual-person households are also buying cheaper sets. Typical items found in such low-priced sets include canned food, cooking oil and snacks.

However, companies are also competing with more unconventional sets like so-called home meal replacements that can be reheated and resemble home-cooked meals.

Another gift set trend this year is catering to the taste and lifestyle of younger generations.

Emart began selling sets of imported beer on Tuesday. The item proved popular for gifts during the New Year holiday in January. The boxes contain well-known brands like Stella Artois and Krombacher Weizen.

Ministop organized a category at its convenience stores that contains products for those who value leisure activities. A tent and camping matt will be included, both under 50,000 won.