Travel records likely to be broken over 10-day break

Travel records likely to be broken over 10-day break 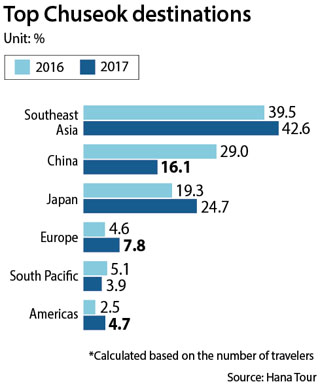 As the upcoming Chuseok holiday will be as long as 10 days for some people, the number of Koreans choosing to travel overseas during the harvest holiday period is expected to hit a record high.

According to data accumulated by local travel agencies on Wednesday, the number of overseas travelers may peak at as many as 1.1 million people during the long holiday season. The figure is about twice that of previous years.

Korea’s largest travel agency Hana Tour said Wednesday that roughly 79,000 people had booked travel programs that begin during the Chuseok holiday season, which is from Sept. 30 through Oct. 2, as of Monday. Last year, when the holiday only lasted six days, about 39,000 people traveled abroad using Hana Tour.

“Considering last year’s figure is based on calculations after the holiday and there is still two to three weeks to go until this year’s Chuseok, the number of people booking overseas travel is expected to increase further,” said a spokesperson from Hana Tour.

“As it is rare for [salaried workers] to be off work for 10 days in a row, more people are looking for overseas travel options,” said Won Hyung-jin, a deputy general manager at Mode Tour. “And its notable people are choosing destinations that are further away like Europe and the Americas compared to closer destinations like Southeast Asia or local tourism areas.”

According to Mode Tour, travelers to Europe increased by 77 percent on year and to the Americas by 71.7 percent. Though these areas are popular, they haven’t been popular destinations for the September holiday season in the past since it takes much longer to get there and the Chuseok holiday isn’t normally long enough.

“Flights to long-haul destinations in Europe such as Istanbul in Turkey and Madrid and Barcelona in Spain that depart during the holiday season are almost fully booked,” a source from Korea’s largest air carrier Korean Air said. “As for the Americas, the booking rate for flights headed to Toronto, Canada amounts to 92 percent and Hawaii 86 percent.”

Travel to closer and widely popular destinations such as Japan and Southeast Asian countries also increased, though tourism to China has dwindled, impacted by the ongoing dispute over the deployment of the Terminal High Altitude Area Defense antimissile system.

As more people plan to travel overseas the average amount of spending over the holiday period is also expected to increase, according to Byun Ji-sung, a team leader at job site Job Korea.

According to a Job Korea survey of 1,349 office workers released Wednesday, average spending for the holiday will increase by roughly 20 percent from 403,000 won last year to 484,000 won this year.

However, critics say the increased spending won’t do much to help boost the economy - as the Moon Jae-in administration hoped - as more Koreans will be spending their money abroad.

According to the Bank of Korea, Korea’s tourism deficit hit $6.24 billion during the first half of this year largely due to an increasing number of Koreans leaving the country and a declining number of tourists, especially from China, visiting Korea.