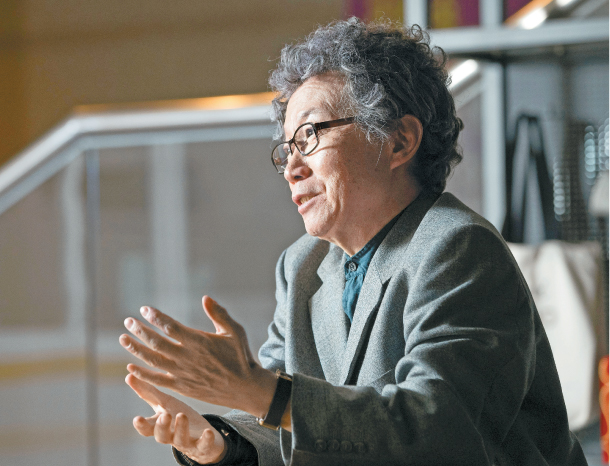 Suh Kyune-yull, professor of nuclear engineering at Seoul National University, sternly said North Korea’s sixth and most powerful nuclear test to date conducted on Sept. 3 was so powerful that it could “wipe Seoul off the Google Map” and that its “launch of an ICBM-level Hwasong-14 and subsequent success of its sixth nuclear test is more than a game-changer for North Korea.”

The renowned professor, who has a doctorate degree in nuclear engineering from the Massachusetts Institute of Technology, lambasted the Moon Jae-in government for insisting that the North has yet to cross a red line drawn by the president, who said crossing the red line would mean the North had mounted a nuclear warhead atop an intercontinental ballistic missile (ICBM).

The professor said such an assertion was nothing more than a “play of empty words.”

Below is an excerpt from the interview with Suh, conducted a day after the North’s latest provocation.

Q. The North’s sixth nuclear test was the most powerful test to date, correct?

A. This is a major event. Compared to its fifth nuclear test, conducted in September of last year, which produced a yield of up to 10 kilotons (1 kiloton is equivalent to 1,000 tons of TNT), the South Korean military estimated Sunday’s test was at least 5 times more powerful, while the U.S., China and Japan assessed it to have been 18-20 times more powerful.

Let’s just imagine for a moment that 10 nuclear warheads, one of each as powerful as the one dropped on Hiroshima, exploded 500 meters [1,640 feet] above Seoul. If those warheads are also capable of an EMP [electromagnetic pulse] attack, all the city’s communication, transportation and electricity sources will be paralyzed. Seoul will be forced back to the Stone Age.

Notwithstanding this, the Blue House and the South Korean military are still quibbling over whether it was a hydrogen bomb or boosted fission weapon. I am not sure if they are just being naïve or trying to downplay the magnitude of what just happened. The North has already crossed the red line of nuclear development.

The Blue House’s remark that the North has yet to cross the red line, but has instead stepped on it, is nothing more than a play of empty words meant to fool the South Korean people. The government must tell its people the gravity of the situation we are facing now.

What do you mean when you say the North’s sixth nuclear test has changed the rules of the game on how to deal with Pyongyang?

The North’s launch of an ICBM-level Hwasong-14 and its subsequent success of the sixth nuclear test is more than a game-changer for North Korea. Simply put, the North gained everything it could have gained.

While South Korea’s military said an artificial earthquake tremor caused by the nukes was at magnitude 5.7, the U.S. and China both assessed it at 6.3, while Russia said it was 6.4. Which is correct?

We detect such tremors by collecting tremor activity from deep underneath the East Sea. It therefore needs to be examined. But for China, such re-examination is not necessary because it borders the North. A 25-story building on the border city of Yanbian was shaken for 30 seconds. This is huge. Based on our estimate, the yield sparked by the test is 50 kilotons, but based on U.S and Chinese estimates, it’s between 200 and 600 kilotons.

People say Mount Mantap [where North Korea’s underground nuclear test sites are located] will not have major landslides because it is composed of granite. Is that true?

With the force of explosion seen on Sunday, Mount Mantap has no chance of remaining intact. Had it burst in Seoul’s sky, it would wipe Seoul off Google Maps.

I am sure the North had carried out other tests that did not go well and are not known to us. The North did every nuclear test at Mount Mantap in Punggye-ri, from beginning to end. Neither does the North have any other place to test nuclear weapons, nor does it need to conduct more tests.

All it needs to do now is to just assemble parts to make a nuclear weapon. I think the North has succeeded in making a 1-ton warhead that can be mounted on an ICBM capable of hitting Hawaii or Alaska. And based on the North’s current technology, I think it can make a 500-kilogram (1,102-pound) warhead to target the central part of the United States in six months.

The North’s state media has been bragging about the strength of its EMP. What are your thoughts?

When you develop a nuclear arsenal, you naturally gain expertise in nuclear EMP technology. Other states recognized as nuclear-armed states do not brag about having such technology. The North is bragging about it because it wants to emphasize to the world that it has succeeded in diversifying its arsenal. It is making a threatening statement that not only it will test nuclear EMPs, but other fatal weapons such as neutron bombs and depleted uranium ammunition.

Foreign media suggested that the North could conduct the next nuclear test on the ground or in the ocean. What do you think?

For North Korea, a seventh nuclear test would not mean much. Most nuclear-armed states stopped testing nuclear devices after their sixth. But it can still try another test like a nuclear EMP, neutron bombs and depleted uranium ammunition far in the ocean.

But now we must come to grips with the fact that we now have this fatal, destructive weapon weighing on our shoulders. Even if the North stopped their nuclear testing now, it does not mean their quest for nuclear weapons has ended. It is just going into the next phase. The North has prepared many nuclear options, all at the same time.

How quickly can the North now produce a nuclear weapon?

Now it has succeeded in nuclear testing, so all it has to do is copy that. In a nuclear marathon, the North has just passed the finish line. It just needs to invest time and manpower to assemble the necessary parts to make a nuclear bomb. I think it can make between 60 and 100 nuclear warheads. For reference, China has around 300 nuclear warheads.

If South Korea entered a full-fledged nuclear development race now, how long do you think it will take for the country to produce a nuclear warhead?

With its current nuclear-related technology, it will take about six months to produce a nuclear weapon that matches the scale of the North’s nuclear test on Sept. 3, on the condition that Seoul could mobilize all defense-related state-run agencies like Agency for Defense Development and private firms for nuclear development.