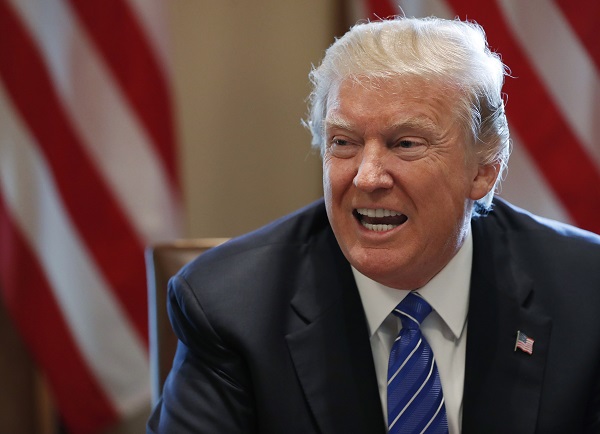 President Donald Trump speaks during a meeting with Malaysian Prime Minister Najib Razak in the Cabinet Room of the White House in Washington on Tuesday. [AP/YONHAP]

The latest UN Security Council sanctions on North Korea are a small part of the process and "nothing compared to what ultimately will have to happen," U.S. President Donald Trump said Tuesday.

“We think it’s just another very small step -- not a big deal,” said Trump in a joint statement with Malaysian Prime Minister Najib Abdul Razak at the White House, following the 15-member Security Council’s unanimous adoption of the latest resolution on North Korea the previous day, which puts caps on exports of crude oil and refined petroleum products to the country.

Trump appeared to be downplaying the impact of UNSC Resolution 2375, which is considered a watered-down version of the original U.S. draft in response to the North’s sixth nuclear test, which called for a complete oil embargo.

“I don’t know if it has any impact, but certainly it was nice to get a 15-to-nothing vote,” said Trump on the resolution, which also drew in the support of veto-wielding council members China and Russia.

Trump said he and Secretary of State Rex Tillerson discussed the sanctions, which he described as “not big” compared to what ultimately will have to happen, though he did not elaborate further.

The president lauded the Malaysian prime minister, remarking, “He does not do business with North Korea any longer, and we find that to be very important.”

When asked by a reporter what Trump meant went calling the UN sanctions “not a big deal,” Sarah Huckabee Sanders, the White House press secretary, elaborated later that day, "I think he actually said this is a small step and part of the process.”

She said that the “ultimate goal here is a denuclearized Korean Peninsula,” and that is “what we have to push towards.”

Sanders added, “We're going to continue taking those small steps, but at the same time we know that those very parties that voted to do this all have to do more.”

Her response appears to be directed at China, the North’s main trading partner and primary oil supplier.

When asked if Trump is considering cutting off Chinese banks from the U.S. financial system when he warned of the UN action being “nothing compared to what ultimately will have to happen,” Sanders replied that all options are on the table.

“This was a small step in that process, and we're hoping that they’ll take a greater role and a more active role in putting pressure on North Korea,” said Sanders.

Despite the latest UN Security Council passing with the support of China and Russia, U.S. Treasury Secretary Steve Mnuchin similarly indicated Tuesday that Washington may impose further secondary sanctions on China should it not fully implement existing ones.

“These sanctions work,” said Mnuchin at the CNBC Institutional Investor Delivering Alpha conference, adding that “they worked with Iran,” though he said Washington could have ultimately “cut a better deal.”

“And in North Korea, economic warfare works,” added Mnuchin. “We sent a message that anybody that wanted to trade with North Korea, we would consider them not trading with us. We can put on economic sanctions.”

His remarks echoed the president’s tweet earlier this month saying he is considering stopping trade with any country doing business with North Korea.

The landmark nuclear deal sealed in 2015 between Iran and the P5 plus 1 group of world powers -- the United States, United Kingdom, France, China and Russia plus Germany -- imposed strict limits of Tehran’s nuclear activities for 10 years in return for a lifting of UN Security Council as well as U.S. and other unilateral sanctions by Western countries.
Mnuchin said he is “pleased” with the latest Security Council resolution, adding, “This is some of the strongest items. We now have more tools in our toolbox, and we will continue to use them and put additional sanctions on North Korea until they stop this behavior.”

He added, “I think we have absolutely moved the needle on China,” describing what Beijing agreed to in the latest resolution as “historic.”

He also recalled the U.S. Treasury’s sanctioning of a Chinese bank for the time.

“And if China doesn't follow these sanctions, we will put additional sanctions on them and prevent them from accessing the U.S. and international dollar system,” he added. “And that's quite meaningful.”

While so-called secondary sanctions on Chinese banks and entities, which the Trump administration has been forecasting ahead of the Security Council vote, appear to be on hold to give China time to enforce the latest round of sanctions, the United States is also warning that they are still an option.

Experts and officials have noted that sanctions were effective in bringing Iran to a nuclear deal, though the case for North Korea is different because they are further along in their nuclear program.

South Korean Ambassador to the United Nations Cho Tae-yul told reporters in New York that the expected result of the latest UNSC resolution goes beyond simply reducing oil provided to North Korea by around 30 percent. “The effectiveness of sanctions can be measured when the other side changes their position, so we will have to go to the end.”

He continued, “While there are differences between Iran and North Korea, which is excluded from the international economy, ultimately Iran reached out for negotiating a nuclear deal because of the effectiveness of sanctions.”

Cho added, “The United States is using the most pain-inducing card, secondary boycotts, in the process of negotiating the resolution and in its implementation,” referring to the possibilities of sanctions on third-country entities. “When the United States indicated it could move forward with secondary boycotts, there has been the cooling effect of Chinese financial institutes trying to avoid transactions with North Korea.”