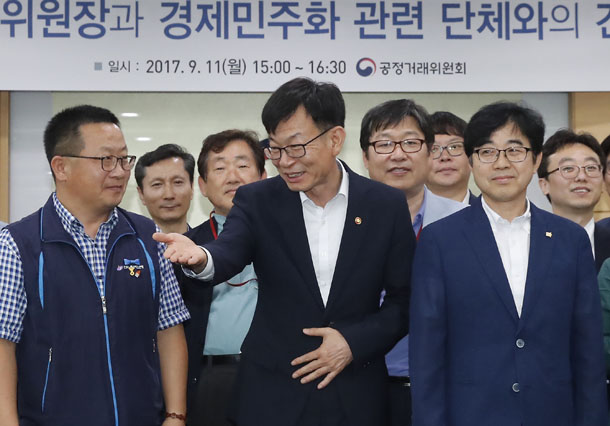 The Fair Trade Commission is the state authority responsible for ensuring law and order in the economy. The business community naturally would fear its chief above anyone else. New chief Kim Sang-jo is particularly dreaded. As an activist, he was dubbed the “chaebol sniper” for his devotion to challenging family-run corporate empires. Even the mightiest conglomerate heads cannot talk back to Kim now that he is authorized to carry out industrial restructuring to level the playing field and give breaks to smaller companies.

But someone has publicly challenged his mighty power. Lee Jae-woong, who founded Korea’s second largest internet portal, Daum Communications, called Kim arrogant on social media. He withdrew his harsh comment after Kim publicly said he humbly accepted the criticism. But I do not think the fiasco should be let go so lightly.

Kim irked the IT community after he publicly discounted Lee Hae-jin, founder of internet portal Naver, by comparing him unfavorably to Steve Jobs of Apple. He claimed that Lee does not deserve respect like Jobs because he did not have any vision for the future. Without innate disrespect for Korean entrepreneurs, Kim could not have made such an insensitive comment. Lee of Daum, who was among the pioneers of Korean IT ventures, lashed out at Kim for insulting a fellow entrepreneur who single-handedly built a company into a leading internet player in Korea and Japan.

Kim’s condescending behavior has been controversial in the past. As a witness in the trial of Lee Jae-yong, the vice chairman of Samsung Electronics accused of bribing former President Park Geun-hye, Kim testified at length so that his testimony could have a “positive effect” on Samsung Group and the Korean economy. He said Lee’s succession to power at Samsung Group will be complete only when his management capabilities win approval from the markets. Kim then compared Lee to Hyundai Motor heir Chung Eui-sun, whom he claimed has proven his management capability to some extent. Who has given him the authority to make judgments on the ability and legitimacy of heirs to family-run corporate empires?

When Kim took office two months ago, he vowed to “wipe the tears” of weaker economic stakeholders. He was referring to small and mid-sized enterprises, the franchises and mom-and-pop stores. But in the business world, there are no permanently strong or weak players. Lee Jae-yong, having been on trial, and Lee Hae-jin, who pleaded with the FTC not to include Naver in the so-called chaebol category, are weak in another context as they are at the mercy of the authorities. An establishment or individual with domineering ways cannot truly wipe the tears of anyone.

Maybe Kim is a busybody by nature. Many agree Kim is knowledgeable, studious and thinks logically and reasonably. But such a character also runs the risk of a person appearing all-knowing. In FTC meetings, Kim often speaks his opinion first. He lectures those who differ with his views. His predecessors kept their views to themselves so that their decisions did not influence the judgment of others in reviewing or making regulatory decisions.

Kim’s position is too significant to make excuses for personal foibles or excesses. The role of the antitrust agency has gotten heavier with the task to achieve both chaebol reforms and to enhance the rights of the smaller stakeholders. There are high expectations about Kim’s changes to the Korean business sector. Every comment he makes can cause ripples in the business community. His words are closely watched. He must comport himself more delicately.

Former deputy prime minister Lee Hun-jai once said that reforming the chaebol is like taming a wild horse. Over-eagerness can make a rider fall to the ground. Horsemanship requires familiarization and befriending an animal. Otherwise, the horse will bolt.