Korea Dance Association turns its focus to the public

Korea Dance Association turns its focus to the public 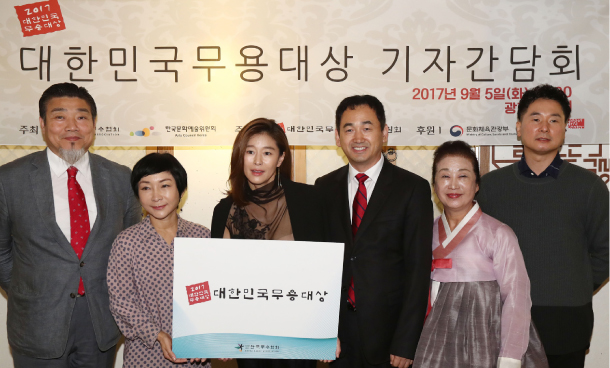 The Korea Grand Prize for Dance has typically been a gathering for only dancers and experts in the field. However, celebrating its 10th opening this year, the ceremony seeks to change its exclusive image by making the event more open and friendly to the public. To appeal to a wider audience, actor Ye Ji-won has been selected as an honorary ambassador of 2017 The Korea Grand Prize for Dance.

The actor considers dancing to be a friend that she has a special connection with, having first started dancing when she was 10 years old. After becoming an actress, she starred in several films where being a dancer was part of her role, including the movie “On the Occasion Of Remembering The Turning Gate,” directed by Hong Sang-soo.

The competition will begin on Sept. 28 and end on Oct. 1. The competition will be held on the outdoor stage of the Seoul Arts Center in northern Seoul, allowing for the event to be open to the public. Fifteen teams of various genres from traditional Korean dance to modern dance and ballet, who passed preliminary rounds held in August, will take the stage.

In the past, the competition ran into some controversy over its scoring system, so this year the organization has completely renovated the evaluation system of the competition.

One of the several major changes this year is that there will be civilian judges and an electronic scoreboard. Up until last year, there were only experts privately judging the dance teams, which created issues as they were not required to reveal the specific standard in their judgments.

On the other hand, some have questioned the qualification of civilian judges. Cho Ki-sook, the event’s steering committee leader, said that although the civilian judges are considered non-experts, they are not total strangers to dance.

“We will do our best to make The Korea Grand Prize for Dance a festival for everyone by increasing fairness and transparency,” said Cho Nam-gyu, the president of Korea Dance Association.

The Korea Dance Association was established in 1961, is headquartered in Seoul and has 78 other offices across the country and three overseas branch. The organization also runs the Seoul Dance Festival, Young Choreographers’ Creative Performance and the Korea International Modern Dance Competition.