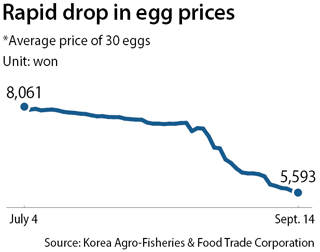 Over the past four months, the average price of eggs has fallen by nearly half as Korean consumers remain wary of product safety following a pesticide scare last month - and they’re about to get even cheaper.

Discount retailers, which regularly adjust produce prices based on the amount charged by suppliers, have launched special discounts on eggs to spur customer demand, bringing egg prices to a year low.

The companies said the measure was aimed at boosting consumption of eggs from their partner farms.

Egg prices reaching the 4,000 won level is significant because earlier this year, the same product went for 10,000 won at several retailers after a bird flu outbreak led to a supply shortage.

According to the Korea Agro-Fisheries and Food Trade Corporation on Thursday, the average price of 30 large eggs over 60 grams was 5,593 won, down nearly 25 percent from last month. Between late April and mid-July, figures were stuck between 7,800 won and 8,100 won and stayed in the 7,000 won level until last month.

The three major discount chains have lowered prices at least twice since the government announced last month that certain egg farms in the country had used harmful pesticides. The response from consumers, however, has been generally cold, with some saying the discounts are too small compared to the nearly 40 percent tumble in producer prices.

Government officials and those in the industry don’t expect the decline to last forever as Chuseok, a holiday during which egg consumption traditionally rises, will begin in October, and Emart and Lotte Mart say egg sales have improved this month compared to last month.