Upgrades are coming to Daesan

Upgrades are coming to Daesan 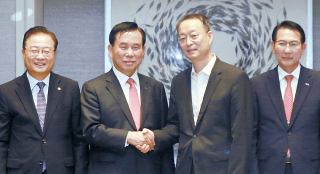 Trade Minister Paik Un-gyu, second from right, shakes hand with Huh Soo-young, chairman of the Korea Petrochemical Industry Association and CEO of Lotte Chemical, after a meeting between government officials and representatives from the Korean petrochemical industry on Thursday at Lotte World Tower in southern Seoul. [YONHAP]

Korea’s petrochemical industry will work with the government to expand investment in research and development as well as upgrade an industrial complex in Daesan, South Chungcheong.

During a meeting hosted by the Ministry of Trade, Industry and Energy and attended by executives from Korea’s top petrochemical companies, including LG Chem and S-Oil, on Thursday, Minister Paik Un-gyu urged companies to boost research in chemical materials.

It was the first meeting between industry leaders and the government since the Moon Jae-in administration took office in May.

As part of that effort, three companies present at the meeting - S-Oil, Lotte Chemical and Hanwha Total Petrochemical - signed a memorandum of understanding with representatives from the provincial government of South Chungcheong and the city of Seosan, where the Daesan complex is located, to cooperate on developing the infrastructure for production.

The complex is home to some 50 petrochemical companies, making it one of the largest industrial complexes in Korea. Despite the size, some companies there have been unable to expand their facilities due to various issues like land ownership disputes.

The memorandum of understanding signed on Thursday is expected to resolve some of the issues hampering development. The ministry estimates that the total investment required to upgrade the complex will be as much as 10 trillion won ($8.83 billion).

“Specific plans on future development have yet to be made,” an S-Oil spokesperson said. “But the memorandum of understanding that includes three companies, whose presence at the complex is considered the largest, indicates that the city of Seosan and the Trade Ministry are really trying to push for changes there.”

Although LG Chem, one of the country’s largest chemical companies, did not take part in the memorandum, the company has already been pursuing expansion in the complex.

Since July last year, LG Chem has been building out its elastomer factory in Daesan. The expansion is scheduled to be completed next year, and the company is putting as much as 400 billion won into the project.

Once complete, LG Chem’s elastomer production capacity will more than triple from 90,000 tons to 290,000 tons, the company said. Elastomer is used to create car bumpers and insulate noise in buildings.