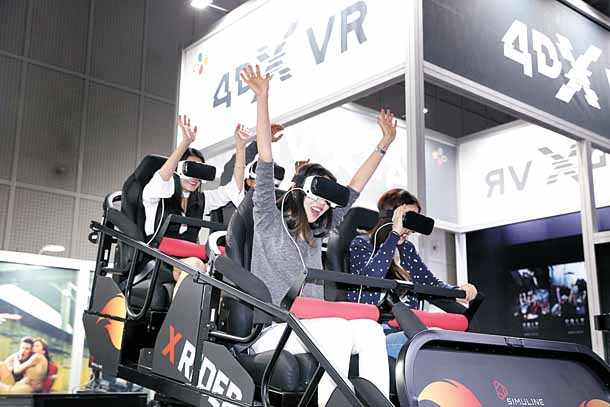 CJ 4DPLEX, a subsidiary of Korea’s largest cinema chain CJ CGV, will be a part of the Korea VR Festival 2017 (KVRF), which is slated to kick off Saturday.

In its second year, the upcoming VR exhibition is hosted by the National IT Industry Promotion Agency and the Ministry of Science and ICT under the supervision of the Korea VR AR Industry Association. Corporations like KT, LG Electronics and Sony are also scheduled to join the event.

Taking place from Saturday to Tuesday at the Nuri Dream Square in Sangam-dong in western Seoul, CJ 4DPLEX will showcase its 4DX VR product, which combines VR and 4DX technologies.

4DX is CJ 4DPLEX’s immersive format that features seats that move and effects that mimic wind, rain, fog and scents to enhance the viewing experience.

CJ 4DPLEX will offer two types of 4DX VR experiences: Passive VR and Interactive VR. Unveiled in Korea for the first time, users of Interactive VR will be able to actively control what they see and how they move via head mounted displays while riding a motion simulator.

VR Racing, which was first introduced in Singapore in June at the Asian Attractions Expo 2017, will be one of the Interactive VR experiences showcased at the festival.

The 4DX VR offers sports experiences like biking and kayaking as well.

“The 4DX VR that will be showcased at KVRF will provide [viewers] with a maximized sense of reality and multisensory immersion that can not be felt while simply watching VR video,” said CJ 4DPLEX CEO Choi Byung-hwan, adding that the company will continue to develop technology-based cultural content and platforms.