Las Vegas rolls out the red, white and green carpet

Las Vegas rolls out the red, white and green carpet 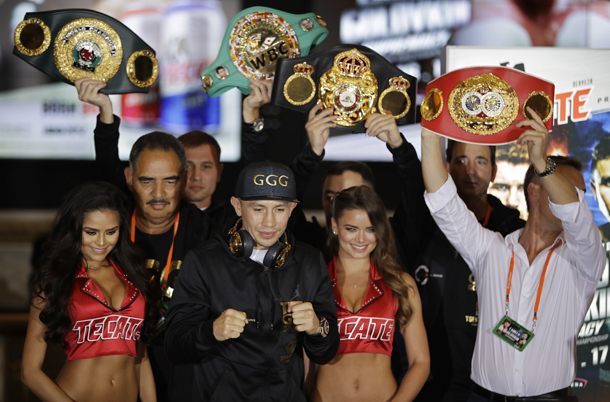 Gennady Golovkin poses on stage during the fighter arrivals in Las Vegas on Sept. 12. Mexico’s popular Saul “Canelo” Alvarez squares off Saturday, against Gennady Golovkin in a long-anticipated middleweight bout as part of the Mexico Independence Day celebrations in Las Vegas.[AP/YONHAP]

LAS VEGAS - Las Vegas never needs an excuse to party, and as an entertainment oasis a short trip from Mexico, the city will roll out the red, white and green carpet starting Friday to celebrate Mexican Independence Day.

A premier boxing match, a bell-ringing ceremony and more than a dozen performances by Latin megastars, including Ricky Martin and Alejandro Fernandez, were expected to attract tens of thousands of visitors, making the weekend once again one of Sin City’s busiest.

The holiday, often mistaken in the U.S. for Cinco de Mayo, over time has become a star-studded celebration of Hispanic culture.

“It has developed over two decades or more to become a staple. Las Vegas has the ‘ambiente’ - the fun, the excitement - all year long, and then you bring in Alejandro Fernandez, Pepe Aguilar and the ones who have the residencies like Ricky Martin and Jennifer Lopez,” said Rafael Villanueva, senior director of international business sales for the Las Vegas Convention and Visitors Authority.

The celebration is so much wider it includes those superstars who aren’t Mexican, including Martin and Lopez, who both have Puerto Rican roots.

“If you talk to many people in Mexico, they’ll say if we are not going to the Ciudad de Mexico, we are coming to Las Vegas because of all the entertainment,” he said.

The Sept. 16 holiday marks Father Miguel Hidalgo y Costilla’s call to arms that sparked the Mexican uprising against Spanish rulers in 1810. The rebel priest was killed the next year, but his words, known as the “Cry of Dolores” or “Grito de Dolores,” eventually led to independence from Spain in 1821.

What started as private entertainment shows for high rollers from Latin America has evolved into one of the city’s busiest weekends, with companies booking performers a year in advance and airlines adding direct flights from Mexico.

“Probably over the past 15-20 years, we have really embraced the holiday, bringing top-level, A-level acts and fights,” said Sid Greenfeig, vice president of entertainment and booking for MGM Resorts International, which is hosting seven shows and a megaboxing match across its properties.

“We look definitely at diversity within the artists, and having arenas and large venues, we also look at acts that can fill these rooms.”

The city’s signature offering is a boxing match. So much so, Floyd Mayweather Jr., before he retired, made Mexican Independence Day his own holiday, fighting multiple times over the years. Promoters have traditionally offered fights featuring Mexican boxers on the El Grito and Cinco de Mayo weekends.